Deacon's demands.
Deacon's little drop-in to Spencer Publications was entertaining - loved how he suggested he could work 'under' Alison. Too funny. Bill got rid of him with another death threat, though Deacon didn't appear to take it very seriously. Deacon kind of gave up his leverage when he told Katie everything, so it will be interesting to see if he returns to try again.

Drifting away.
Unless she's got the baby blues, I can't understand Katie's sudden lack of 'take charge' attitude. This is the woman who was running the show in the hospital while almost kicking the bucket. Of course, big sister Brooke recovered from learning what Bill did to Hope long enough to deliver a lecture to Katie about the need to forgive for the sake of her child. Hello! Why can't she 'forgive' Deacon then?

Waiting game.
Brooke and Stephanie's tender scenes discussing Ridge's absence seem all the more poignant given the sad development where Stephanie's health is concerned. Eric and Stephanie's scenes at the end of Friday's episode had me in tears. Gah, this is going to be such emotional stuff.

Closure.
Hope and Liam's closure scene was probably meant to tug at the heartstrings, but the scenario has just been re-played too many times. Wrung out.

What did you love or hate about "B&B" this week? Comment below.

If you missed it last night, check out our Vampire Diaries recap, Growing Pains, and see a photo of Jenny McCarthy at her book signing through Soap Opera Fan Blog's Star Gazing. 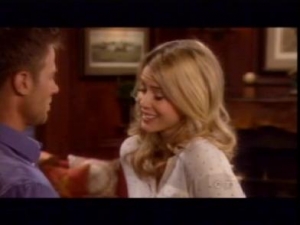 It’s been amazing having a variety of storylines and characters to watch again on “B&B.” It feels like a ‘whole’ show again, rather than a series of scenes dealing with Hope/Liam/Steffy strung together. Now if only we could get a competing fashion house into the mix again… Thoughts for this week:

Panic attack.
Brooke’s tale of woe upon returning alone from her honeymoon was, well, strange. After all Ridge and Brooke have been through, and the transgressions he’s forgiven (Oliver!), it’s not very plausible that he’d suddenly throw in the towel on their honeymoon because she was texting Deacon. Also, why would she lie about it? They had discussed her issues with Deacon at length – she was quite open about wanting to keep him away from Hope. Additionally, the bit about the paperwork not being filed was surprising coming so soon after the same stumbling block was used for Hope and Liam. In any case, it’s what viewers have to contend with given the hasty exit of Ridge.

Sweet Caroline?
The character of Caroline has undergone a bit of a personality transplant in the past week or so – or did we just not know her very well? Caroline appeared to be an intelligent and strong young woman – one who would most certainly see through Rick’s transparent manipulations. Thomas’ reignited interest in Hope figured in, but it was still unnerving to see Caroline buy fully into Rick’s rhetoric because it made her appear to change overnight from a person with integrity to a disloyal dunderhead. In any case, Rick’s been too sleazy to be appealing lately, so it remains to be seen if they’ll become a viable couple with chemistry rivaling what she shared with Thomas. Do you think Caroline’s changed? Vote in Soaps.com’s B&B Personality Transplant poll.

Sister act.
Steffy and Hope’s banter about their brothers’ altercation was enjoyable, but things took a turn for the weird when Hope badgered Steffy into admitting she and Liam had slept together. Hope asked the same thing after the Italy video, and after she knew they’d been together at the nightclub. Why does she want to hit herself over the head with this information?

The Bold And The Beautiful Spoiler Video: He's Back

The Bold And The Beautiful Saturday Teaser Poll: Favor