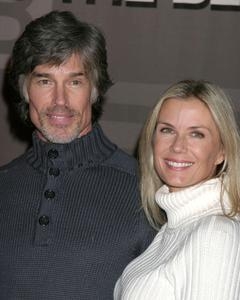 In “The Bold And The Beautiful” history, January 25, 1999, Brooke Logan used “The Young And The Restless'” Victor Newman to make Ridge jealous…

Genoa City’s Victor Newman arrived in Los Angeles for a possible partnership between Jabot cosmetics and Forrester Creations. While Victor voiced his concerns over Forrester’s lack of research for the product line, Ridge was worried Victor would take advantage of Brooke, who was dealing with the fact that Ridge and Taylor were trying for a baby. Ridge’s jealousy only escalated when Victor agreed to create a fragrance for Forrester.

He confronted Victor, who accused Ridge of still having a thing for Brooke. Ridge warned Victor away from Brooke, and Victor warned Ridge never to mess with him. Brooke overheard their argument and invited Victor to dinner. Lauren Fenmore told Brooke she was playing with fire and wouldn’t want to be her if Victor found out he was being played.

While at the Cafe’ Russe Victor noticed Brooke watching Ridge and Taylor and called her on the real reason why she’d brought him there. He seethed that no one played games with Victor Newman. After Brooke shared her and Ridge’s history with Victor it reminded him of Nikki and he agreed to kiss Brooke! It wasn’t long before Ridge appeared at their table, consumed by the green monster. Victor privately told Brooke her plan had worked, wished her luck then left town.

View Soaps.com’s After The Soap Finales: Where Are They Now to hear which former “AMC” and “OLTL” actors will be appearing in various Hallmark movies then check out Soap Opera Fan Blog’s DOOL Fan Fiction to see which man serves Sami best.