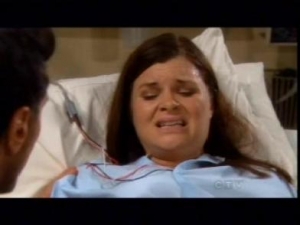 It was an entertaining week on “B&B” with Bill and Katie’s situation being the focus. Not that we were free of a Hope and Liam rehash by any means – the apparent need to have them on every episode is nauseating. The week at a glance:

A good time to start praying.
Bill’s version of praying was kind of hysterical. I mean, we all know Bill becomes gruff and brash when feeling vulnerable, but his prayer was more like issuing a directive. In any case, Bill got the outcome he was looking for…

I missed ya’, Cowboy.
“B&B” must have a department especially for coming up with corny lines that no one would ever really say. Yeesh.

The hug.
It was awkward, but it was a hug. The one between Donna and Pam, of course. It’s always kind of heartwarming when characters who are usually at cross-purposes set their bitterness aside when something big is happening.

We’ve got her!
The drama surrounding Katie giving birth and then coding was well worth watching, including her little trip into the bright light where she saw Storm. I always liked Storm, even though they wrecked his character toward the end. Not so great was Katie still talking about Hope and Liam’s relationship in the middle of it all – flat-out stupid. In any case, it was high emotion as Katie’s life hung in the balance.

A better option.
Taylor stopped by Forrester this week to find Steffy basically complaining that work was cutting into her time to obsess over Liam. Gah.

A new house in the city.
The mind boggles at Katie, who just underwent a c-section and suffered a heart attack being released from the hospital the next day, let alone having the strength to bicker with Bill about the future. In any case, Bill was on bended knee making pledges and asking for forgiveness, so we'll see how that pans out for him. Should Katie forgive Bill? Let us know where you stand by voting in Soaps.com's B&B Katie’s Position poll.

Nowhere but up.
Steffy took Liam to her special place after he confessed that he'd made another unsuccessful attempt at reconciling with Hope. It's amazing how he seems so much happier and more compatible with Steffy, yet repeatedly sets her up to be the consolation prize. What's more amazing is that she lets it happen.

What did you love or hate about "B&B" this week? Comment below.

Get caught up with actors and actresses from canceled soaps through All My Children Soap Digest and One Life To Live Soap Digest.