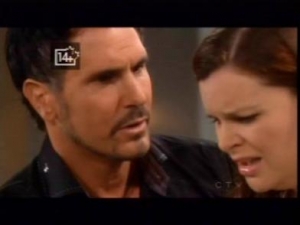 Some storylines seemed like ‘the same old, same old’ this week, but there was also some welcome drama and emotion.

Photo shoot.
More of the same from the younger set at Forrester Creations this week. Rick continued to blatantly manipulate, this time with a photo shoot, that left me wondering why Hope doesn’t hook up with Oliver again. Once again, Caroline had the most genuine response to what was happening as her emotions were all over the place while trying to cope with Thomas and Hope’s past and their current closeness. She also received another kiss from Rick – which just seemed icky, not sure why…

Snitch.
Deacon stunned Hope by turning up at Forrester. He all but confessed to deliberately ruining her wedding in Italy, but Hope, predictably, gave the whole conversation the fairy tale treatment and later painted it as Deacon returning to protect her. Deacon, meanwhile, got caught arguing with Dollar Bill by Katie, and took pleasure and amusement from ratting him out to his wife. Katie’s reaction was to go totally ballistic, which I found to be way over the top given that she already had overheard a conversation between Dayzee and Marcus about Bill plotting to sabotage the wedding, and basically chose not to pursue it. Essentially, she shouldn’t have been surprised much by this reveal, and so her shock and outrage seemed out of place. What did you think of Katie’s reaction? Let Soaps.com know by voting in our B&B Katie’s Meltdown poll.

Breathe.
Immediately after Katie vilified Bill, he sprung to her rescue when she began having labor pains. This contrast is what makes Bill such a compelling character. The drama in the hospital with Bill alternately panicking and trying to calm Katie was the best viewing of the week.

When one door closes...
Taylor's scenes with Liam on Friday seemed like they were going to be a lot of psychobabble, but turned out to be much more. The raw emotion was refreshing - even if Taylor did kinda' use the situation to put in a plug for Steffy.

Another one opens...
Taylor's gentle nudge toward Steffy appeared to have worked as Liam showed up at her door in better spirits than he's been in all week. Their playful interaction made it seem like they might just get back together.