Ex-B&B’s William deVry In A Killer Among Us 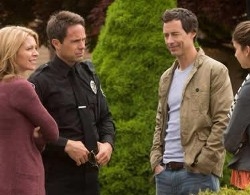 William deVry, who once played Storm Logan on “The Bold and the Beautiful,” and also Michael Cambias on “All My Children,” is appearing in a new Lifetime movie, “A Killer Among Us.” deVry plays the town sheriff in this film, which is based on a true story about a widowed father of three whose teenage daughter is trying to uncover the truth about her mother’s murder. Also starring in the movie are Tom Cavanaugh (“Scrubs,” “Ed”) and Tess Atkins (“Girl Fight”). It airs Saturday September 15 at 6:00 PM ET on Lifetime. Check your local listings!

Find out what people are saying about Keith Urban through Reality TV Rush, and learn what Viggo Mortensen was up to in Toronto through Soap Opera Fan Blog’s Star Gazing.

The Bold And The Beautiful's Sean...