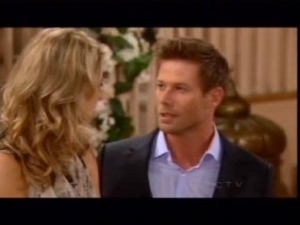 Another wedding in the books. (CBS)

It’s been an emotional week on “B&B” as Brooke and Ridge remarried. Here are some thoughts:

Red wine, red meat.
Bill went the caveman route this week as he tried to make Liam a ‘real Spencer’ by force-feeding him rare steak and cigars. Kinda funny, but also kinda dumb – like calling him ‘Liam the Conqueror’. In any case, Liam showed up at Brooke and Ridge’s wedding looking like Bill’s mini-me, but still acted as soppy as ever, mooning over Hope.

Big dreams.
This stuff with Rick trying to manipulate everyone to do his bidding really rubbed some the wrong way this week. It’s hard to watch because he’s not even the least bit clever about it! He’s utterly transparent and totally a turn-off. There’s no way the other characters would listen to him for even a second. The most realistic scene coming out of all this was Caroline warning Hope away from Thomas. She’s genuinely confused and concerned.

Can you move on?
Wasn’t it just a short time ago that Taylor told Ridge how Thorne just doesn’t measure up in her heart or whatever? Now she’s telling Thorne she’s already ‘moved on’ from Ridge, with him, and playing kissy-face. All this while she moons over Ridge-themed photo albums. I’m afraid for Thorne – but it sure was great to see them this week!

Wedding preparations.
There was a sudden surge of feelings between Brooke and Stephanie this week, which lead to Steph helping Brooke get into her wedding dress. A nice touch. Of course, this followed the odd scene with Steffy dropping into Brooke's bedroom and offering to leave. Bizarre.

The wedding.
It was a good turnout for this wedding - even Bill showed - he usually begs off of these Forrester shindigs. Presumably, he felt he needed to keep an eye on mini-me, since that's about all he did. Anyway, I love a gathering, and there was some unexpected comedy, such as Pam careening around the mansion and calling Donna 'fat', some unexpected moments, such as Eric talking sweetly with Donna, and of course the expected interactions between Hope/Liam/Steffy/Thomas/Rick/Caroline. Gah. Brooke and Ridge's vows were funny (thanks to Brooke's reference to what might 'arise') and very emotional. Kleenex! Later, oddly, it was Brooke and Stephanie's relationship that took centerstage. They are truly a 'supercouple', but it was a strange focus given that it was Ronn Moss' last episode as Ridge. What did you think of the wedding? Vote in Soaps.com's B&B Wedding poll.

Hear the latest from the "Hell's Kitchen" winner through Reality TV Rush, and learn where Helena Christensen was spotted, and with whom, along with other celebrity sightings, in Soap Opera Fan Blog's Star Gazing.

The Bold And The Beautiful's Sean...