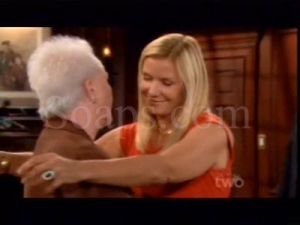 It’s been awesome to see a wider variety of characters onscreen, but the storylines aren’t giving us much to root for lately. Here are some talking points on the week.

Over is over.
Not as far as Brooke’s concerned! Mama Bear continued to press for a Hope/Liam reconciliation against all odds, as she spoke to Hope about her and Liam ‘finding their way back to each other’, and later informed Ridge that ‘Hope belongs to Liam’. It’s wonderful that Brooke’s such a romantic, but someone really needs to sit her down and explain that Liam’s not ready for marriage (and neither is Hope for that matter). They may also want to gently break the news that people don’t belong to other people. Paging Dr. Stacy!

Barking Bill.
Dollar Bill was his blunt self this week as he became frustrated watching Liam moon over Hope’s press conference, and began hollering at him to snap out of it etc. It’s funny how Liam takes no notice of him now and continues on doing what he likes. I’m not sure why Steffy is choosing to spend her time watching Liam pine for Hope, but her conversations with Bill and Katie showed that she’s fine doing just that. By week’s end, Bill had another plan in the works – this time a family dinner including Katie and Steffy. Yikes, this can’t be a good idea. Bill is the Energizer Bunny of schemes and plots – and must be an eternal optimist too…

Kissing around.
Thomas kissing Hope at that press conference in front of Caroline was horrible. Not only was it mean and thoughtless, but from Brooke to Dayzee to Hope to Caroline, it's been demonstrated that Thomas falls hopelessly in love with the object of his affections, so he should still be superglued to Caroline with no thoughts of Hope or anyone else able to permeate the obsessive mire. The fact that he's taking cues from Rick is equally ridiculous. As for Rick, they're making him look like as much, if not more, of a sleaze than Thomas or Liam. With all three of these guys being portrayed as slimeballs, who are fans supposed to be drawn to or rooting for? Just bizarre. What did you think of Thomas kissing Hope? Let us know by voting in Soaps.com's B&B The Kiss poll.

A big, big, olive.
Stephanie finally offered her blessing to Ridge and Brooke (although I thought she did this when she was battling cancer), and will now plan their wedding. It was cute to see Brooke and Stephanie's huggy moment. Such a super couple.

Exhausted.
Hope's exhausted from forgiving Liam? We can so relate. Who else nearly shed tears of frustration watching them hash it all out again on Thursday's episode?

Find out which SheKnows personality will be appearing on "Weeds" through Primetime Spoilers, and don't forget to check in on the latest celebrity sightings on Soap Opera Fan Blog's Star Gazing.

The Bold And Beautiful Weekly...