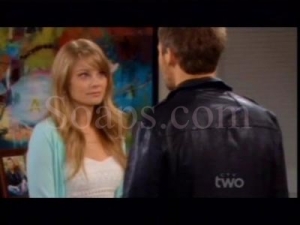 The dreaded Hope/Liam/Steffy triangle has spun so far out of control that it’s sucked in Thomas, Caroline, and Rick. Sure viewers wanted to see other characters, but preferably in their own storylines as opposed to being dumbed-down and thrust into this ongoing insanity. Just not sure what it is viewers are supposed to be rooting for in all of this! The repetitiveness has killed most of the genuine interest in the triangle, and the one promising romance that was emerging on the show – Thomas and Caroline’s – now appears on the verge of being sacrificed to feed the beast. How do you feel about Rick, Caroline, and Thomas being thrown into the triangle storyline? Vote in Soaps.com’s B&B Thrown In poll.

Stupid choices.
The week began and ended with Liam kicking his own ass once again, and wanting what he doesn’t have, as usual. Every conversation that he has at this point is predictable, even with Bill, which is a shame.

The dark side.
Hope’s reaction to all of this only further illustrates her immaturity. Sure she has a right to be ticked off, and dumping Liam was exactly the right thing to do, but telling him to go live on ‘the dark side’ with Steffy was melodramatic, laughable, and just dumb. Getting Thomas to insta-paint a giant heart on the side of Liam’s house with the Spencer sword through it? I can’t…

Getting real.
While Steffy was asking Liam if he was ready to start getting real, she should have considered the same question herself. This relationship chameleon she’s become – changing her tune with every new development – is a disservice to the character. She may be the best match for Liam, but if he can’t see it, it’s pointless to hang around.

White knight.
I'll say it again. There's no way Thomas would flip switches and start pursuing Hope given the intense feelings we were led to believe he's developed for Caroline. Not only that, but they've been joined at the hip - I don't even buy him leaving Caroline out of the loop while he's helping Hope get her things. Throwing Taylor into the mix, telling him to figure out his feelings for Hope, is highly suspect, as is the idea that Thomas would be so easily manipulated by Rick.

It won't be me.
Caroline letting Rick kiss her this week was puzzling, Rick hitting on her before he's even managed to effect a split between her and Thomas was repugnant. Caroline seems like a very sharp cookie, which is why it's unbelievable that she wouldn't immediately be turned off by the utter sleaziness of Rick making moves on her knowing she's still with Thomas, and the arrogance of him tooting his own horn about what a great big brother he is to Hope. Lurking in bushes? Schmoozing Caroline with lines about how he'll run the company one day? Slimy. Amber needs to come back stat - she made Rick appealing.

Read the rumor about Michael and Rachel on "Bachelor Pad" through Reality TV Rush, and don't forget to check out the latest celebrity sightings on Soap Opera Fan Blog's Star Gazing.