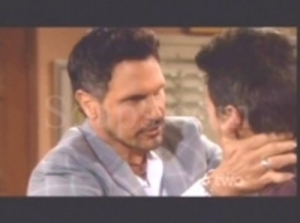 I never should have gotten involved in a Logan wedding!
Pam likely wasn’t the only one thinking that after the spectacle of Liam begging Hope in his underwear unfolded at the Forrester manse this week. I found it tough to watch, not just because Liam’s behavior was cringe-worthy, but because it seemed out-of-character. Whatever you think of Liam, he quite likes himself most of the time, and can almost always justify his actions. He arrived full of attitude and seemed irritated by Hope needling him, but then turned on a dime and started begging. Wrong on a few levels.

Liam the conqueror?
The Liam and Bill scenes were intense, emotional, even brilliant, but the bit with Bill calling his son ‘Liam the Conqueror’ and telling him ‘we take what we want’, was way too cheesy. What are they viking warriors? Who comes up with this stuff?

It doesn’t have to be over.
Egad, Brooke! I couldn’t believe she was still clinging to the dream at this point! At least Katie showed a shred of sanity this time around by placing the blame squarely on Liam for screwing both girls around – about time!

Big brother.
Um, why has Rick suddenly burst forth from the woodwork to get all embroiled in Hope's business again? His concern would be much more believable if he'd been on the scene all along, which is why we need to see all characters more consistently. What do you think of Rick's plan? Vote in Soaps.com's B&B Rick’s Plan poll.

Leave me out of it.
Thomas is so completely into Caroline, and was with Hope for all of five minutes. Wait, he was never really with Hope because she was never truly into him. Anyway, if Thomas bails on Caroline to pursue Hope merely because of Rick planting the seed in his mind, I'll find it utterly unbelievable. Not only because we've been lead to believe he has intense feelings for Caroline, but because you would have to be a complete idiot not to see Rick's agenda. Just saying.

What did you see?
While Hope runs around discussing things with Rick and questioning Othello, who for reasons unknown will probably do Rick's bidding and lie, Liam is hanging out with Steffy. Again. Just wrap this up and let's all move on.

Read about the season premiere of "Bayou Billionaires" through Reality TV Rush, and don't forget to read my Pretty Little Liars recaps each week.

Ronn Moss Leaving The Bold And The...