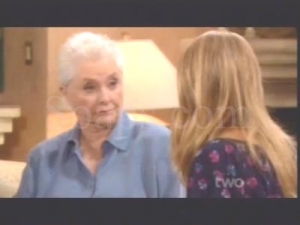 Monday – A Free Man.
Today began with Steffy uttering the words that many were thinking, “Yet another wedding.” Indeed, Hope’s latest vision of the perfect wedding began to take shape and it looked a lot like an intimate gathering at the Forrester Mansion. Hope filled in Ridge and Brooke, and Pam offered herself as a wedding planner – yay, comic relief! As Steffy took up the mantra, “She’s walked out on you again,” over at Liam’s, and Hope vowed, “Nothing will ruin this wedding,” at Brooke’s place (a sure sign that something will ruin the wedding), Thomas and Caroline’s nearly non-stop make-out session was interrupted by Danielle, who tried to convince Caroline to move home. Their reaction was a little like mine – really? They soon returned to kissing, this time to New York City sounds. Perhaps we should find this annoying, but their chemistry is really happening, so I was into it. Do you find Caroline and Thomas hot? Vote in Soaps.com’s B&B How Hot? poll. Across town, Steffy and Liam had moved their party to the nightclub, where Liam was hollering about being a free man in a free land or some such bunk. Young people having fun on soap operas always seem so awkward!

Tuesday – And So It Begins…
On this episode, Hope asked Stephanie to have the wedding at the Forrester mansion. Bizarre to begin with, all things considered, but even more crazy was that Hope actually pressed Stephanie to do it even after she bluntly told her she had a problem with it! The drive to have the perfect wedding truly must be all-consuming if she’s willing to plead with someone after they say that. Meh. Over at Spencer, Bill gets back in the swing of ranting about Hope – thank you for giving him his personality back – and cozied up with his oh so pregnant wife, Katie, aka, Mama, in the office chair. Steffy and Liam, meanwhile, took a ride. On her motorcycle, of course.

Wednesday – Last Night Of Freedom.
While Liam and Steffy busied themselves flirting and checking items off his bucket list all over town (where are the paparazzi now?), Hope and Brooke spent time in their comfort zone – dealing with florists and caterers, and much to our amusement, Pam. I could not believe it when Brooke said Ridge was designing another gown! There are no words for the level of spoiled happening here. Anyway, back at Liam’s place, Steffy got real with him, said her piece, and walked out the door. Later, Stephanie’s coughing attack (a bid to buy Steffy time?) caused Hope to make an unnecessarily mysterious phone call to Liam and cancel their dinner plans. Why wouldn’t she just tell him what was going on? Yeesh. Liam, once again, did not go looking for Hope to find out what was wrong, but made a beeline for Steffy. He so wants to have his cake and eat it too…

Thursday - The Big Dilemma.
Although Stephanie and Hope shared some warm, fuzzy moments, Stephanie told Hope again that she didn't think she and Liam were ready for marriage, and that she believes he has unresolved feelings for Steffy. However, Hope's determination to have her perfect wedding was not to be deterred by something so insignificant as logic. She even insisted on having Stephanie's blessing. Yikes! Over at the nightclub, Steffy let Liam pull her all over the dance floor and even nibble on her shoulder. I would have told him to go fish - how many times will she let him run back to her as a consolation when Hope disappoints before she's had enough? Anyway, he was lampshade-on-the-head drunk, and obviously did something shocking to his appearance, judging by Steffy's big eyes. This made me very excited for Hope's reaction to whatever he's done. Elsewhere, Ridge and Brooke spent a steamy night in bed...discussing Hope, Liam, and Steffy. Gah.

Friday - Poached Salmon And Vichyssoise. Oh boy. So Liam wakes up in bed with Steffy - again - after a night of heavy drinking - again. Can someone please remind me why Hope wants this guy? Was it not just their last conversation together where Hope asked Liam to please come to her if he had some kind of problem before running to Steffy? Yet, the minute she missed dinner he ran out to hang with his homegirl instead of pushing Hope to know more. And about that makeover - who brings a temporary tattoo stencil into a bar? I am so glad Hope asked him pointblank, no secrets, if he was with Steffy. If he answers honestly, there is no telling how long those people inside the house waiting for the wedding will be munching on the buffet. With Hope in her wedding white and Steffy in her bad-girl motorcycle outfit, you couldn't really accuse Liam of having a "type." I just wonder which one of these girls cries uncle first.

Watch former "One Life To Live's" Evangeline Williamson's dance video, and more, through After The Soap Finales: Where Are They Now? Also, don't forget to read my Pretty Little Liars recaps each week.