Liam reached a new low this week by leaving Steffy at his house while he ran over to get Hope to make his decision for him, but other than that, we've seen it and heard it all before. Hope wants everything to be perfect to the point of being nauseating, Liam's lost all credibility, and Steffy has regressed from having some dignity back to throwing herself at the object of her affections. Bleh.

Taylor and Ridge.
Their candid conversation about the past was interesting this week. Seems Taylor is still romancing Thorne (not that we'd know, we never get to see him or them as a couple) but still can't get past her love for Ridge to give his brother her whole heart. Ridge says he'll always love Taylor. Could this be leading to another go 'round of the Brooke/Ridge/Taylor triangle? Would you like to see it happen? Let us know by voting in Soaps.com's B&B Brooke/Taylor/Ridge poll.

Find out what former "AMC" actor, Colin Egglesfield is up to, and more, in After The Soap Finales: Where Are They Now? Also, don't forget to read my Pretty Little Liars recaps each week. 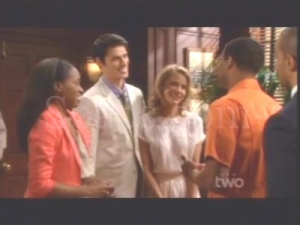 The misadventures of Hope, Liam, and Steffy featured heavily again this week, with the storyline about Marcus’s troubles wrapping up. Here are some thoughts on the storylines:

Hit and run.
Like the revelation about what really happened to Anthony, Marcus’s texting and driving storyline felt like a bit of a ‘hit and run’. About two weeks ago, Marcus suddenly developed a heavy texting habit. The texting while driving crash occurred right after. Within a week, Marcus had a tense wedding night, an overnight stint in jail, a melodramatic hearing in court, and then Caroline and Thomas found evidence that cleared him. Marcus and Anthony made up, Dayzee and Marcus reconnected as husband and wife, and Caroline and Thomas celebrated being a great team. While it was timely and admirable to address the dangers of texting and driving, and the return of the bumbling Baker boys was entertaining, the super-fast storyline and feelgood ending was all a little too pat. Now what?

Hair-trigger.
While it was interesting to see Rick get into the triangle action this week and put in his two cents to Hope, it’s all just starting to sound the same. Even with different characters weighing in, there are only so many ways to look at the Hope/Liam/Steffy triangle, and so many times you can listen to it being discussed and rehashed before you are just sick to the teeth of the whole thing.

The Bold And The Beautiful Spoiler Video: So Sorry

The Bold And The Beautiful Saturday Teaser Poll: Suspicion