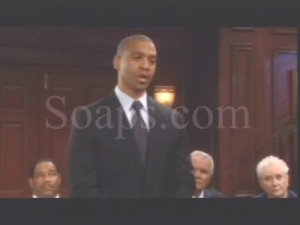 “B&B’s” focus has been back on the triangle this week, as well as on Marcus’s accident. Check out the thoughts for this week:

Serial texter.
Marcus’s dialogue felt too much like a PSA at times this week, but what really got me was the heightened drama surrounding his case. Dayzee’s uncharacteristic damsel in distress routine was a bit much considering he was facing a maximum of six months in jail. You would think it was six years! But that was nothing compared to what went on in the courtroom, where Baker accused Marcus of being a – gasp! – serial texter! Things got even more entertaining when the D.A. and Justin went head-to-head and the judge decided that Marcus was a flight risk and remanded him to custody. Get real! This was so ridiculous that it made a bit of a farce of the storyline. It will be interesting to see what Thomas and Caroline discovered on the video footage. Will it get Marcus off completely? Probably, which is too bad, because that also compromises the integrity of the story/message about texting and driving.

Confronting Liam.
Hope put on her low, serious voice to deal with Liam this time. The foot-stomping was at a minimum as she asked him why he’s able to switch back and forth between her and Steffy like he’s changing channels. Reality check, Hope – because he can! In any case, she tore up the papers as a declaration that any wedding of hers that isn’t fairytale perfect, is nothing more than a hoax. She then announced she was going back to her mother’s house. Steffy told Brooke that Hope needs to learn to deal with the real world. If the ‘real world’ means understanding that things are rarely perfect, and that Liam isn’t great husband material, then I agree.

Welcome back, Steffy.
Things had just got to the point where I could no longer buy Steffy's self-sacrificing routine as believable when she showed up at Liam's door. In response to hearing that Hope had moved back to mommy's, she finally declared her own position. Thank you. Steffy is the kind of girl that knows what she wants (though why she still wants Liam is beyond me) and who goes for it. The girl scout bit was getting old. Of course, now that she's put her cards on the table, it won't be what Liam wants. Sigh. It will never end...

Leaving the door open.
Brooke couldn't stress enough to Hope on Friday that by moving out of Liam's house she was leaving the door wide open for her rival. Most mothers would, by this time, be of the opinion that Liam was a fickle mess, not worthy of their daughter's love, but not Brooke! She's still clinging to the dream. Sigh. I don't really get it. What do you think of Brooke's warning to Hope? Let us know by voting in Soaps.com's B&B Brooke’s Warning poll.