Thursday - Glow Of Love.
It was amazing to see Thomas and Caroline today. Thomas still acted a little too starry-eyed for my taste, but no matter, they seem like a good match, and it was just such a relief to see a couple that didn't have Liam making up one half of it. It was interesting that they referred to Rick's line being dropped and Rick having moved out of the guesthouse. Huh? In other news, Steffy briefed her family on her current outlook and told Taylor she thinks Bill may have been behind Deacon showing up in Italy. Taylor took the hard line, saying Bill should be in jail if that's the case. Over at Bill's, he was obnoxiously rude to his sister, Karen, when she dropped in at the house, and then proceeded to talk himself up to Katie as he told her how he'd turned over a new leaf where Hope was concerned. Katie wondered if he'd had a personality transplant - judging by how he treated Karen, the answer to that would be 'no'. They headed over to see the doctor, where Bill enjoyed a goofy moment playing in the stirrups! Wow, Bill's certainly displayed a range of moods this week!

Friday - A Little Sword Necklace.
Bill continued to be the man of a thousand faces, as today we saw his softer, more vulnerable side in the ultrasound appointment. It was so cute when he joked that they might see a little sword necklace! At Forrester, Steffy told Taylor all about what happened in the hotel room after Hope didn't show up at the church. In Italy, Liam's mind was also on Steffy...and so the triangle churns on. Hope, chirpy and oblivious as ever, decided to call Steffy up to see how she's doing - honestly, this chick should be living in a fairytale castle somewhere with little mice and bunnies as her happy little friends! Gah! What do you think Steffy should do now? Vote in Soaps.com's Steffy’s Situation poll.

See what your faves from "B&B" and other soaps wore and had to say! Visit Soaps.com’s main page, locate the video player, and click on the little gear for 'options' to watch Soaps.com's Daytime Emmy Red Carpet Interviews. Find out who won from all of the Daytime soaps by reading Soaps.com's Live Daytime Emmy Blog. It's all there! 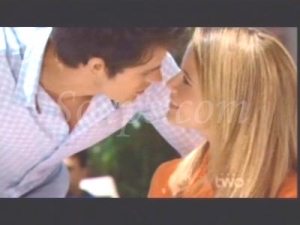 Monday – Welcome To The Family.
Liam and Steffy’s ‘goodbye’ in the hotel suite, as she told him to put a smile on his face and not think about her or ‘what happened’, was heartwrenching. It was all downhill from there. Well, not totally. There was the unexpected, totally hot kiss between Deacon and Alison – way to leave us wanting more Deacon! Otherwise, the show became a sopping pile of goo, with Ridge forgetting all about Steffy to salve his dented ego and get back in Hope’s good graces, and a suddenly watered-down Bill taking heat from Steffy and doing a bizarre ‘aw shucks’ routine in which he welcomed Hope to the family. What? After the insane lengths he went to trying to prevent this union, and the diatribes he unleashed about Hope? The best case scenario here is that Bill was faking it, because his abrupt turnaround blew the integrity of that aspect of the storyline – it felt as though a wheel came off – suddenly you couldn’t really count on anything.

Tuesday – All Yours.
Aside from the comedy bits involving Steffy, this episode had little to redeem it. Even the Eric and Stephanie parts weren’t stellar. Hope and Liam’s wedding may have been a payoff for their fans, but this certainly won’t go down in the annals of soap opera history as any great shakes. The couple is essentially boring, the bride is an insipid little girl, and the groom was ready to run off with someone else five minutes before the ceremony. That alone gave the wedding and Liam’s vows a ridiculous feel – not to mention the out-of-the-blue acceptance of the groom’s father, who had been actively trying to prevent the nuptials up until that morning! Thank goodness for the beautiful Italian scenery.

Wednesday – The Marching Band Got Lost In Traffic.
Well, the good news is that Bill appeared to have his cojones back as he dealt with Deacon on the jet. I was sorry to see Deacon depart and hope he’ll be back in L.A. soon. Still in Italy, Hope was magically ‘unfrozen’ now that she was legally married. Please. Happily, we got to see some other characters, as Karen and Danielle were seen in a liplock by Katie, who seemed to think Bill would be fine with his sister being a lesbian. Karen’s not so sure, however, having been spooked by their father’s attitude. It will be interesting to see how Bill reacts.

The Bold And The Beautiful Spoiler Video: Discussing Bill

The Bold And The Beautiful Saturday Teaser Poll: Found Out