Thursday - He Was Right.
The episode kicked off with Liam ranting that his father had been right about absolutely everything. Wouldn't it have been realistic for Liam and/or Steffy to be slightly suspicious at this point that Bill might be manipulating again. Especially when he calls right on cue and has the jet fired up and ready to go? Anyway, Hope was still at the church extolling the virtues of Deacon to a disbelieving Brooke and Ridge, but soon realized she'd better find her fiance. Back in L.A., Taylor and Stephanie made a girls' night out of speculating what was going on in Italy, and Stephanie chewed about the Logan girls always coming out on top...'nuff said. Meanwhile, at the hotel, Liam had done another one of the complete turnarounds he's getting famous for, and kissed Steffy after asking her to come with him. Though they are the couple I prefer of the two, I so wished she had told him in that moment that she would not be his consolation prize. Right? So, who knows what went on between this pair before Hope arrived, but he looked a little shell-shocked when Hope insisted nothing had changed. Across the hall, Brooke had flashbacks about Deacon - loved seeing those old scenes!

Friday - A Blind Man Could See It.
Today, Liam continued to look stunned as Hope gave him an enthusiastic account of meeting her father and trying to get to the church. Liam's reaction was that everything was not fine, and everything had changed - rather cryptic. Hope glossed right over that, and told him to get dapper again - they're going to be married on the bluff. Egad. Methinks Liam is in a tizzy because he and Steffy hit the sheets before Hope got there - anyone else? Over in the other room, Ridge suddenly got a clue and suspected Bill was behind Deacon showing up. On the Spencer jet, Alison got up in Bill's face about what he was doing - I can't imagine why he hasn't fired this chick, but it's entertaining to watch. Last but not least, Ridge confronted Bill, who appeared to be shaking in his boots. Not. Do you think Liam should marry Hope now? Let us know by voting in Soaps.com's I Can’t Do This poll. 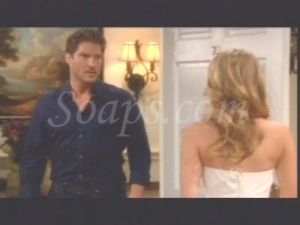 Monday – I Wanted You Here. I loved the scenes between Hope and Deacon! Quite frankly, they were the best reason to watch this week. One could sense how torn Deacon was between his awe at meeting his daughter, and what he knew he had to do. Elsewhere, Bill and Ridge each felt Liam out to see if he was wavering, but he was ready to go ahead with the wedding. Steffy, however, was not, and told Hope she wouldn’t be standing up for her. Why torture herself? Today we also got our first look at Bill’s nifty suit – Dollar Bill or Pimp Daddy?

Tuesday – I Can’t Be At Your Wedding.
More poignant scenes between Deacon and Hope today – though it was a little weird that she told him she could handle selfish jerks. Huh? At the church, while Ridge mooned over whether Hope would ever call him ‘Dad’ again, everyone else started to clue in that Hope wasn’t coming. Steffy hung out on her terrace and experienced more flashbacks – yes, the same ones again – gave the episode a draggy feel. At Spencer Publications, Katie overheard Marcus worrying to Dayzee about what Bill was up to. Please. He’s known about this for how long, and left it until after they had gone to Italy to do something?

Wednesday – I’m Done!
Well, Hope watched her driver speed off, and wound up jumping in the cutest, teeniest little truck ever! I cringed a little at her getting in there with the white dress on, but no matter. They then raced to the church with Hope calling out to the driver to hurry in Italian. Gah. Reminded me of the weird paparazzi chase in Aspen, and not in a good way. Back at the church, Liam caved and headed back to the hotel. Bill called Steffy to give her a heads up. He then received a call from Katie, who had managed to get enough out of Marcus that she felt she needed to clarify the rules for her husband. Bill neatly avoided agreeing to anything. Later, Hope arrived at the church and nearly put Brooke over the edge by telling her she’d seen Deacon. Had to laugh! Meanwhile, at the hotel, Liam decided, after seeing the note, that Hope had ditched him, and went cray cray on the tablet – boy he is attached to that thing, isn’t he? Making a video wouldn’t have been my first thought… Anyway, he decided he was done!

The Bold And The Beautiful Spoiler Video: Hope's Happiness

The Bold And The Beautiful Saturday Teaser Poll: Hard Time