Meanwhile, Deacon and Alison had some alone time to discuss Bill and his plan. This could be Bill’s undoing. By the pool, Hope explained to Liam why she turned down Ridge’s offer to walk her down the aisle, which really didn't actually make much sense, it just opened the door for Deacon's appearance.

Thursday - Stiff Upper Lip.
Today viewers got to enjoy some of the scenery in Italy as Liam and Hope did some sightseeing – I really loved this aspect of the location shoot. Anyway, Hope and Liam found the perfect spot to be married, and he picked her up and spun her around. Cheese overload. Over in the olive grove, Ridge had Brooke chase him as he hid behind the trees. I don’t know if they were supposed to look like carefree forest nymphs or what, but poor Brooke was really huffing and puffing by the time he relented and let her find the big, giant olive. Jeeze, Ridge. The ensuing proposal was very sweet – except for Brooke blurting that she’d forgotten they weren’t married – who forgets that? Back in L.A., it was terrific to see Eric and Stephanie. The looks she gave him while he proposed a toast to Hope and Liam were priceless! In his room in Italy, Deacon cracked me up by asking Bill if he could stop being a tool for five minutes. Perfect.

Friday - Stubborn Streak.
Today’s episode was terminally boring other than the bits of Italy we got to see, and the interaction between Steffy and Brooke, which was something slightly different. Otherwise, it was more handholding, kissing, and giggling from Liam and Hope and more of Bill warning Deacon. The 'major change' to the wedding plans came when Hope decided she wanted to wed at the church rather than the grand staircase. Other than possibly being a glitch for Bill, it seemed inconsequential. This episode seemed to drag – it would have been nice to have some real drama and a cliffhanger considering it was a Friday episode on location in Italy. Are you looking forward to Deacon and Hope coming face-to-face? Let us know by voting in Soaps.com’s B&B Hope and Deacon poll.

Read the Dallas Pilot: Changing Of The Guard and Episode two recap: Hedging Your Bets. right here on Soaps.com. 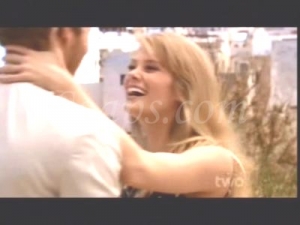 Monday – Not Looking For A Parachute.
On the Forrester jet, Steffy sat wondering how the hell she managed to get herself talked into going along to the wedding, while Liam, idiotically, decided it was important to get all of the discomfort and awkwardness on video. Brooke did some eye-narrowing and whispering about why Steffy came just to help keep things real. Over on the Spencer jet, Bill continued to confide freely in Alison with regard to his sinister plan. Frankly, I’m surprised that Bill is telling her so much – especially since she doesn’t exactly seem to be seeing things his way. It could come back to bite him. At the prison, Bill and Deacon did some more macho posturing and name-calling before heading off to Italy. It’s kind of fun watching these two butt heads.

Tuesday – A Lover, Not A Killer.
Today, Bill appeared to make a threat against Deacon’s life, but then claimed he’s a lover, not a killer. Methinks Deacon should put in a call to his ex, Amber, and get the 411 on what Bill’s capable of! In Italy, Hope spent time hanging off Liam’s neck in his suite, and giggling about becoming ‘Mrs. Liam Spencer’. Sigh. In another suite, Brooke also did her fair share of giggling as Ridge inexplicably went on and on about his need to find a big, giant olive. Bizarre. Later, Steffy explained to Hope that it was just too weird for her to be there, and said she was leaving.

Wednesday – Ol’ Ball And Chain.
Steffy made every effort to leave, snidely telling Bill that Hope and Liam are getting married, and him trying to wish Hope into a breakdown isn’t going to stop it. Too funny. Not to be dissuaded, Bill talked Steffy into staying and they made tracks over to Liam’s suite where Steffy told Hope she’d stand up for her if the offer was still open. This prompted Hope to bounce, clap, and enthuse, “We’re really getting married!” Bill hung around just long enough to make a couple of cryptic comments, and Brooke and Ridge left to go olive hunting.

The Bold And The Beautiful Spoiler Video: Change Of Heart

The Bold And The Beautiful Saturday Teaser Poll: Overheard