The Bold And The Beautiful’s 39th Annual Daytime Emmy Reels

Heather Tom, nominated in the category of Outstanding Lead Actress, submitted scenes from episodes #6127 and #6128, which aired on August 5 and 8, 2011. In the scenes, Katie, still recovering from a heart attack, confronts both Steffy and Bill separately.

Revisit the scenes through our B&B Daily Recap: Promises. You can see clips from the scenes in the preview below:

Jacqueline MacInnes Wood was nominated for Outstanding Younger Actress on the strength of her submitted scenes from episodes #6130 and #6131, which aired on August 10 and 11, 2011. The scenes surround Steffy's reaction when Bill tells her she will have to accept that he is staying with Katie, and the ensuing conversations she has with others.

Revisit the storyline through our B&B Daily Recap: You’re Dumping Me? You can also see clips from the scenes in the preview below: 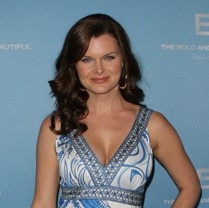 John McCook, who is nominated for Outstanding Lead Actor for his portrayal of Eric Forrester, submitted scenes from episodes #6174 and #6175, which aired on October 13 and 14, 2011. The storyline surrounds Eric surprising Stephanie with a romantic dinner in hopes of restoring the intimacy to their marriage following her battle with cancer, and Stephanie resisting the gesture.

Revisit the story through our B&B Daily Recap: Age Gracefully? One of the scenes is also previewed in the clip below:

The Bold And The Beautiful Saturday Teaser Poll: Regret

The Bold And The Beautiful Spoiler Video: Change Of Heart