Thursday - Bamboozled.
Brooke stopped by Steffy’s office (why?) and after making kind overtures, left warning her not to cling to any fantasies. Stephanie, meanwhile, put in her two cents with Liam about his plans, and though she made a lot of good points about the fact that he's marrying anyone right now, the bottom line is that she's as biased as any of those she’d accused of misleading him. I don’t know how Liam stands all the advice and interference – talk about being smothered. But it’s up to him to stop it – you don’t see people showing up to try and 'bamboozle' Dollar Bill, now do you? Of course Hope gave it a shot. What a train wreck that visit turned out to be. Another couple of rounds with Blunt Bill and Hope will be back on prescription meds. Or perhaps she already is – what else could explain her going to Steffy and asking her to be in the wedding? No words.

Friday - Baby Steps.
Although Bill pressed relentlessly for Steffy to go to Italy, she still didn’t seem to clue in that he’s up to his old tricks – perhaps grief is putting her a little off her game. Across town, Liam seemed ready to read the riot act to ditzy Hope for asking Steffy to be part of their wedding – actually thought I caught a glimpse of a backbone – but then he settled back down into sap mode and told her he admired her efforts at making peace. Ick. Over at Forrester, pregnant Katie floated in on Cloud 9 to see Brooke and Ridge and even joked about Bill getting up to no good at the wedding. Later, she showed up in Bill's office and gushed to him about how he’s coming through for Hope and Liam. He might even have experienced a tiny wave of guilt up there on his ‘little step stool’. But not enough to slow him down; he was soon on the phone intimidating the warden and jetting off to pick up Deacon Sharpe. On the Forrester jet, the most awkward scene ever unfolded as Steffy joined Hope, Liam, Brooke, and Ridge to accompany them to Italy. Hope demonstrated her true maturity level when she giggled and asked Steffy if they could be best friends. Yes, she really did. Hope then proceeded to make out with Liam as everyone exchanged uncomfortable looks. What is this, "The Junior Jerry Springer Show?" What do you think of Hope asking Steffy to be in the wedding? Vote in Soaps.com's B&B Hope’s Request poll. 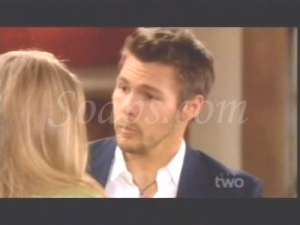 Monday – Thanks For The Memories.
You have to marvel at the way Brad Bell keeps the Hope/Liam/Steffy triangle going. Each time it looks like one of the girls is ‘winning’, the storytelling tips slightly in favor of making the other relationship look better and more genuine. Also, thanks to Steffy ending things with Liam, we were left hanging as to what his intentions were when he called her over there. Liam so reminds me of Ridge in that he lets all of his decisions ‘come about’ or be made for him. Wishy washy! Anyway, after being closer than ever, Steffy and Liam parted ways, while across town at Forrester, the adult busybodies all gathered to speculate on which way Liam might swing come midnight. Not to be left out, Bill put in a call to Taylor and then passed time shooting sinister looks at Deacon’s photo on the laptop. So, all of these people were at their offices at midnight, waiting for the big decision to come down. Really.

Tuesday – Count On Me.
Today kicked off with Liam telling Bill he let Steffy go, er, she let him go. Needless to say, Bill wasn’t pleased. Steffy broke the news to her family over at Forrester – were they there all night? Hope asked Brooke to stand up for her, Liam told Hope that Steffy saw their video chat, and Steffy was too upset to work. Blah. Back at his office, Bill, unaccustomed to not getting his own way, decided he would break out his secret weapon – Deacon Sharpe.

Wednesday – Not The Father.
Since Bill is about to bring Deacon back, it’s only natural that Hope would suddenly develop a huge void in her life where her father is concerned, and that Deacon’s name would start coming up in every other conversation. Funny how that happens. In other news, Liam finally learned that Katie is pregnant, and asked Bill to be his best man. It’s creepy that these young people only hang around with their parents. Liam returned to his office to find Stephanie waiting, and Hope showed up at Bill’s office.

The Bold And The Beautiful Spoiler Video: Best Advice

The Bold And The Beautiful Saturday Teaser Poll: Regret