Thursday - The Clock Is Ticking.
Oh, the clock was ticking alright...slowly. Liam still seemed to be torn - probably a sure sign he shouldn't be jumping into another marriage if he lets the current one end. Steffy's family rallied around her, as she played her wedding bells and tried to be Zen about the whole thing, while over at Forrester, Brooke complained to Eric that everyone seemed to be on 'Team Steffy' and Hope didn't have a wedding dress designer. It was great to see Eric for whatever reason. Next, Hope arrived, spoke about her values, accepted Eric's offer of a gown, and then went back to talking about her latest obsession - not having a father. At home, Liam left that pesky door unlocked again - twice - and had to endure brainwashing attempts by both Bill and Ridge, who, in a surprisingly entertaining turn of events, suggested that Liam get a backbone! You'd know, Ridge! Liam promised to man up and called Steffy to come over...

Friday - After Midnight.
Liam welcomed Steffy at the Malibu house with candlelight and wine. Therefore, viewers could surmise that he (a) had decided to stay married to her, (b) was hoping for a seduction, (c) was dumping her while leading her on, or in the most likely scenario, (d) still hadn't decided what the hell he was doing. In any case, their flirtation was mature and sexy, and wildly different from what he has with Hope. I found it interesting that they had Hope dressed like a school girl in her scenes, which made for a real contrast with womanly Steffy. Brooke and Ridge crossed paths long enough for her to extract a promise from him to walk Hope down the aisle, and to remind him that Steffy is second-best, just like Taylor. Later, Taylor and Stephanie showed up at Forrester to pow-wow with Ridge over what Liam might do now that he'd called Steffy over to the house. Brooke and Hope indulged in more talk about the beautiful wedding in Italy. Back at Liam's, he and Steffy talked in circles, but she still didn't get an answer to her question about their marriage. Honestly, midnight can't come soon enough for any of us! What do you think Liam had planned? Let us know in Soaps.com's Liam’s Plan poll. 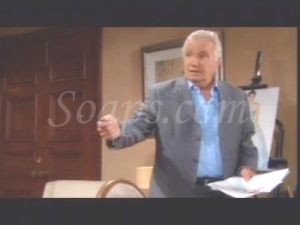 Credit: Off to meet the wizard. (Soaps.com)

It was a short week for “B&B” what with the Memorial Day holiday, so the breakdown begins on Tuesday at the Genoa City prison…

Tuesday – Tortured Father Routine.
I could just feel Deacon’s struggle with wanting to be released from prison, but not wanting to harm his daughter. It will be very interesting to see how things shake out. Brooke’s reaction to Deacon’s name being bandied about seemed way over the top – it may be undesirable to have him around, but that’s about it. It’s telling that she went to the extreme of visiting Stacy’s office and trying to control what she’s telling her client, Hope. Brooke might want to schedule herself in for a session or two! At Spencer, Katie shared her baby news with Karen and Danielle, who were stood up by Bill. Bill, of course, was on his jet boasting to Justin about his plan to rid Liam of Hope. Justin’s phone connected to Marcus’s phone, and he overheard the braggy bits. Uh oh.

Wednesday – Butt Dial Dilemma.
Today picked up with Marcus heading over to Spencer, where he got in Justin’s face about the conversation he overheard. Justin put a stop to the inquiries right quick, but it’s anyone’s guess what Marcus might do with the information now. Whatever it is, he’s sure taking his time about it. Meanwhile, Liam showed up at Steffy’s office to ‘talk’, which we now know means hug, kiss, and get her to whisper, “Cha cha cha” in his ear. She played her wedding bells countdown alarm for him – set to go off at midnight when the divorce would become final. They have a knack for coming up with corny stuff on this show, not to mention repetitive – we’ve heard the bong of those wedding bells about a dozen times since then; anyone remember ‘Pose’? Back over at Spencer, Bill finally had his meeting with Danielle and amused Karen to no end by complaining that Danielle hit on him throughout the interview. Oh, Bill.

The Bold And The Beautiful Spoiler Video: The End?

The Bold And The Beautiful Saturday Teaser Poll: Unhappy