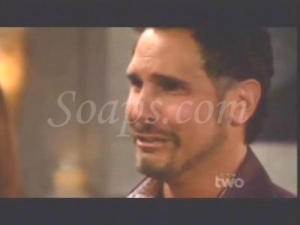 Monday – Big Bad Dollar Bill Is Gone.
Bill’s still not getting a pass on his awful first reaction to Katie’s pregnancy news, but what followed was very emotional, raw, and honest between these two as they went back and forth – such a tough issue! I was really drawn in. Over at the guesthouse, Caroline kissed Thomas and then let Rick kiss her when he showed up. Here we go. I’m not buying that she can’t resist Rick – she makes a better match with Thomas.

Tuesday – I Am Me Again.
Brooke paid her millionth visit to Steffy’s office to rub it in about the wedding and ask what she’s planning – like she’d tell her if she was up to something! So dumb. I liked it when Steffy asked why she seemed so worried. Such a great question – if Liam is 100% committed to Hope, why would Brooke even need to bother with Steffy or be in this big rush to get Liam and Hope hitched. Now that the pressure is off Hope to have sex, she tells Liam, “I am me again.” Pay attention, Liam. How convenient that Hope had a therapy session exactly at the time Alison returned to Spencer Publications and told Bill to dial the number to listen in! Too funny! At Forrester, Marcus and Dayzee told Brooke they hoped their humble wedding plans didn’t interfere with those of the royal couple, er, Hope and Liam. Yeesh.

Wednesday – Daddy Issues.
Liam stopped in at Steffy’s office to feel her up some more – honestly, is this supposed to make him less confused about what he wants? Meanwhile, Bill latched onto Deacon Sharpe as the ‘key’ to stopping Liam from marrying Hope. I’m in the dark as to how Deacon is supposed to accomplish that feat, but I guess we’ll see. At Forrester, Katie told Brooke about her pregnancy, which they spent about three seconds discussing before the topic reverted to Liam/Hope/Steffy. Naturally, Katie had to make a pit stop in Steffy’s office to needle her about her motives for signing the annulment papers. I don’t know how Steffy gets any work done. Back at Spencer, Liam seemed to be playing ‘whichever girl walks through the door next is the one I want’. Hope appeared, so he kissed her.

Thursday - It’s That Simple.
Stephanie made the rounds to put in her two cents about Liam/Hope/Steffy today. I like how it puts her on the cusp of being enemies with Brooke again, but not quite. Marcus and Dayzee shuttled out of Steffy’s office, taking their talk of marriage plans with them, when Hope showed up ready to rumble. Naturally, Hope and Steffy ended up discussing their daddy issues, since suddenly, all anyone can talk about is Deacon Sharpe. Up the hall, Ridge brought up Deacon’s name to Brooke out of the blue as well. Bill, of course, was jetting to see Daddy Deacon at that very moment, scanning his rap sheet, and spouting off to Justin.

Friday - I’ll Do It.
In a shocking turn of events, Ridge continued to stick to his guns about the wedding dress, earning a big hug from Steffy. After, Hope gave Brooke a panic attack by saying she wanted to look up her bio dad, Deacon. Brooke ordered Hope to stop thinking about Deacon and focus on Brooke’s wedding, er, her wedding. Back in Steffy’s office, she and Ridge discussed – who else – Deacon Sharpe. Ridge rasped that it’s best he stayed the hell out of Hope’s life. Love Ridge when he gets the ol’ emphasis going! Over at the surprisingly huge Genoa City Penitentiary, Bill and Deacon went an entertaining couple of rounds before Deacon, being the low man on the totem pole, gave in to Bill’s demands. We could see Deacon’s struggle and regret already – love the bad boy with a heart! What should Deacon do? Vote in Soaps.com's Deacon’s Dilemma poll.