Thursday - A Family Matter.
Today was the Rick/Amber blowout – very passionate arguments and emotion on both sides. I almost thought he was going to forgive her at one point – boy, Brooke would have had a conniption if he had! In any case, it seems the character of Amber was brought back to the canvas only to be run into the ground – I don’t get it. The story of her growth and a more mature relationship with Rick would have been something to invest in. Should Rick forgive Amber? Vote in Soaps.com's Rick and Amber poll. In other news, Caroline decided to push the envelope and bring Thomas over to meet her parents. Karen seemed like she was going to burst a blood vessel!

Friday - Built To Last.
After much hushed whispering and awkwardness, Thomas finally found out the big secret - Caroline has two moms. He was so supportive! Caroline, he's a keeper. As for Bill, I don't blame Karen for not wanting him to know - he can be such a Neanderthal! I felt heartbroken for Katie after the blast he delivered when she shared her happy news. Even if Bill was reacting out of sheer terror, since a pregnancy is so dangerous for Katie and he could lose her, his feelings could have been expressed in a more sensitive way. He's not getting a pass on this one! Brutal! 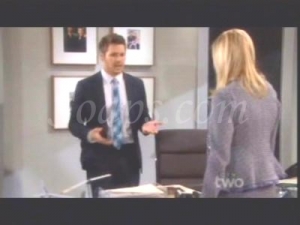 Monday – Maybe It’s For The Best.
I thought Stephanie made a good point when she told Brooke that Hope needs help – not a new husband. Brooke’s tunnel vision when it comes to the quest to marry off her young daughter is madness! For a bright guy, Liam’s not thinking too clearly when it comes to keeping this big secret from Hope. Once she finds out, which she undoubtedly will, she will not only be upset that he tore up the annulment papers, but that he, Steffy, and her own mother, all knew the truth and kept it from her. If that doesn’t send Hope into another downward spiral…

Tuesday – Keeping Secrets.
Brooke grilling Liam was a little hard to take, although I could understand her being outraged on Hope’s behalf. It’s just parental overload. If Hope/Liam/Steffy really need this much of their parents’ focus and energy, than they’re too young to be getting married at all. It’s ridiculous to watch. Over at Forrester, it was comical to see Hope’s reaction to Caroline asking if she knew Rick was a cross-dresser. Good for a giggle.

Wednesday – You Set Me Up.
It was nice to see Ridge and Thomas reconnecting over all things couture and Caroline. Actually it was nice just to see something other than the Hope/Liam/Steffy triangle. Over at Rick’s place, Hope brought Amber’s sins into the light, and Rick eventually clued in that he’d been set-up. Caroline, meanwhile, made plans with Thomas to have dinner, and began alluding to a family secret. Unfortunately, there’s not much excitement or intrigue involved since viewers already know all about it. Spoiler fail.

The Bold And The Beautiful Spoiler Video: Karen's Secret

The Bold And The Beautiful Saturday Teaser Poll: Assignment