The Bold And The Beautiful’s Joanna Johnson Comes Out 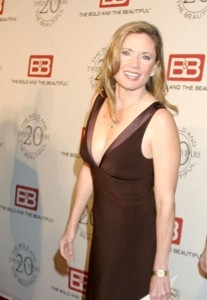 In a recent interview with TV Guide, actress Joanna Johnson, whose “B&B” character, Karen Spencer, is about to come out, revealed that she too is a lesbian. Johnson spoke about her fear of coming out while working in television, and the impact it might have on her career. She also talked about her early fears of not having a family, which proved unfounded – she has a wife, Michelle, and two children; Julian, 5, and Harlow, 2. Johnson says the upcoming storyline on “B&B” with Crystal Chappell (Danielle) helped her to decide to go public about her own life.

Join us on Twitter @soapoperafan and Facebook. Come tweet and Facebook with us about “The Bold And The Beautiful,” all the other soap operas, “Dallas,” “Glee,” “Grey’s Anatomy,” “Scruples,” “Vampire Diaries,” and “Venice The Series.”

The Bold And The Beautiful On...