Thursday - Our Little Secret.
Today, Steffy drove Hope mad by acting confident and serene and not telling her anything about what happened in Aspen – which spoke volumes. Later, Ridge, Mr. Clueless, told Hope how great it is that she and Steffy are making progress. Eep. Meanwhile, in Malibu, Liam appeared to be actually considering taking Bill’s advice and phoning Steffy, when she showed up at the door. You have to give it to her – she played her cards just right by leaving him wanting more, and they now share a secret from Hope to boot. Deciding to keep this explosive a secret from Hope is the pinnacle of stupidity and hypocrisy on Liam’s part. Just saying. Do you think Liam should come clean? Vote in our Liam’s Secret poll.

Friday - Is It True?
At Spencer Publications, Bill very nearly gets caught bragging about his plot against Hope when Liam walks in unexpectedly. Love the way he smoothly parlayed it into a lecture about sales figures. Of course, Liam ended up telling Bill about Steffy’s platonic visit to the house, and Bill had a conniption over Liam not bedding his own wife. Too funny! It seems Liam wanted to sleep with Steffy - clearly he's not ready to choose between Steffy and Hope. Anyway, I also got the giggles when Bill wiggled his fingers at Liam while referring to the ‘magical wedding’. He’s just too much! Hope arrived and tried to stand up to the big bad wolf, telling Bill she will move back into the house - as Liam’s wife. All that was missing was her sticking her tongue out at him. Over at Forrester, it was fun, fun, fun, as Brooke eavesdropped and was thrilled to hear that Steffy signed the annulment papers. Naturally, it was Stephanie who got to burst her bubble, telling her that Liam tore them up. I was a bit surprised at Stephanie’s rant about Hope, and Brooke obviously was too, so it will be interesting to see what is said next! 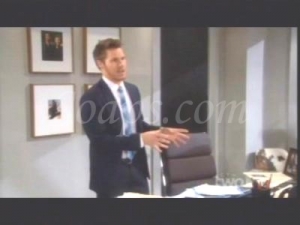 Well, the only reprieve we got from the Hope/Liam/Steffy triangle this week was Rick walking the runway in stilettos – we’ll take it! Here’s your breakdown:

Monday – He’ll Never Stop Loving Me.
Brooke and Hope debated the possibility that Steffy would move in on Liam if Hope moves out of the house, and decided they’d better step up the wedding plans. What? If this relationship is so solid, and the marriage is ‘meant to be’, what’s the panic all about? Why is Brooke campaigning for this marriage when she clearly believes Liam might cheat on Hope at any moment? So insane! Meanwhile, Liam gave Bill the rundown on Hope taking a ‘feel good’ pill in Aspen and mowing over Steffy. Maybe if Liam wants Bill to butt out, he should stop telling him everything! Loved Stephanie declaring that she needed a drink when she heard that Liam tore up the annulment papers and kissed Steffy…but is still with Hope. Bottoms up!

Tuesday – Double Dog Dare You.
Ridge told Steffy he was proud of her for signing the annulment papers, and was pleasantly surprised that Liam tore them up. He claims to be Switzerland in all of this, but methinks he’s secretly rooting for Steffy. Over at Liam’s, Hope told him she was moving out. He let her grovel over her embarrassing behavior, while continuing to keep the secret of what he did in Aspen. Reprehensible. Elsewhere, Amber pulled another one of her little tricks, which resulted in Rick strutting his stuff, rather impressively, on the runway in a pair of stilettos. Of course, it was all engineered for Caroline’s benefit. She walked in and was appalled by the whole scene, and Rick’s nonchalance about wearing women’s shoes. Cute.

Wednesday – Are You Ready For This?
The awkwardness of the Steffy/Hope rivalry was brought into focus as they shared a family dinner. Hope hugging Steffy, apologizing for hurting her, and inviting her to the wedding made her look like such a child. Once again, I wondered what this poor young girl is doing caught up in this adult-sized mess, and why she’s so desperate to be married off. Brooke took the opportunity to rub it in to Steffy that a wedding was being planned in Italy, and Steffy got everyone’s attention by failing to react as expected. Ridge won points with many viewers for growing a pair and refusing to bow to pressure from Brooke to design Hope’s wedding gown. Over at the Malibu house, Caroline got an earful of ‘Uncle Bill’ as he went to work on Liam about his hypocrisy in being able to forgive Hope for lying, but not Steffy.

The Bold And The Beautiful Spoiler Video: Steffy's Words