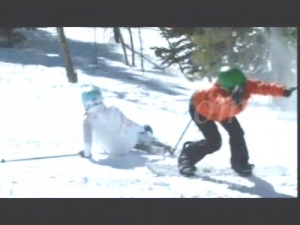 Hope, Liam, and Steffy continued their adventures in Aspen, and back in L.A., everyone obsessed about what was happening in the mountains. Check it out:

Monday – Self-Medicating.
The comedy continued in Aspen, with Steffy making the world’s slowest descent down a mountain (Liam and Hope hadn’t even got on the lift yet when she started out), a photographer getting a shot of Hope popping a pill through the edge of the blinds, and Liam, once again, failing to notice that his girlfriend had morphed into a character from a Cheech and Chong movie. It was hilarious how Hope ran into the one person on the entire mountain she has a beef with – not to mention Steffy was in a bright red jacket – hard to miss! Back in L.A., Stephanie was her usual breath of fresh air, scoffing at the idea that Hope thought she could get away from the media at Fashion Week in Aspen, and across town, Bill found out about the incriminating photo of Hope downing meds – yikes!

Tuesday – Control Freak.
Can someone please explain why Dollar Bill spent so much time justifying his actions to his secretary? How does she even know the Logans and Forresters well enough to argue with him about what kind of people they are! Having Justin call Bill out makes sense since they go back to childhood and Justin has always been a sort of ‘conscience’ to Bill. All I can say is that Alison must be darn good at what she does to get away with giving Bill so much lip! Meanwhile, in Apsen, Liam looked into injured Steffy’s eyes while the flashbacks played through their minds, and Hope sat pie-eyed at the bottom of the mountain wondering what was going on – worth a giggle. What do you think of the Bill and Alison scenes? Let us know by voting in Soaps.com’s Bill and Alison poll.

Wednesday – Enough.
It was refreshing to see Liam call Hope out on being ‘overwhelmed’ and taking another pill. It was also amazing to see Steffy sign the annulment papers – time to get some self-respect back. This character is so much better when she behaves self-assured and confident than when she’s hanging off a man’s clothes begging him not to leave her.

Thursday - You’re Free.
Wow, Liam was actually interesting as he assertively told Hope they needed to have a conversation - and not the high school version. Unfortunately, Hope is pretty 'high school', and that's the real source of some of their issues - he'd have done well to see this sooner. Later, Liam insisted on Steffy coming back to the house - not sure how this would have worked out had Hope not decided to leave. In any case, it was a brave (or perhaps foolish) move on Hope's part - leaving him behind with Steffy to go face up to her problems.

Friday - Cheerio And Toodle-oo.
Hope's confessions in Dr. Barton's office just drove home how tired her endless self-examination is becoming. As always, I felt like she should be having fun at college, not dealing with all this adult drama. Over in Bill's office, he continued, for reasons unknown, to explain himself to Alison. At least he told her today that he doesn't much care if she understands what he's doing - thank you! In Aspen, Liam's shell-shocked expression upon learning Steffy had 'set him free' was priceless - be careful what you wish for, bub! When he could finally speak, he stated the obvious; "Steffy, you signed the annulment papers." Hysterical. Anyway, the roller coaster of emotions between them that followed is what soaps are all about - not to mention the unexpected twist at the end with him tearing up the papers and planting one on her! His interaction with Steffy is so much more watchable than the giggly gushfest with Hope - just feels more 'real' and grown up. Although I still don't think Liam is much of a prize, the scenes were soapy goodness.