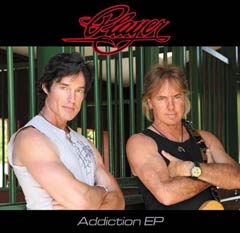 “The Bold and the Beautiful” actor Ronn Moss (Ridge Forrester) has reunited with his band, Player, and they’ve signed a new deal with Frontier Records to release their first album since 1995. As a precursor to the new album, a digital three song EP, “My Addiction,” will hit iTunes today, April 30, and will include an updated version of their big hit song, “Baby Come Back.” Ronn and his band mates, original member, Peter Beckett, Rob Math, Johnny English, and Craig Pilo, will also promote the EP while on a trip to Italy this week.

Soaps.com congratulates Ronn and Player, and will keep readers posted as to the title and release date of the upcoming album.

Read about Aaron D. Spears in Being Mary Jane.

Join us on Twitter @soapoperafan and Facebook. Come tweet and Facebook with us about “The Bold And The Beautiful,” all the other soap operas, “Dallas,” “Glee,” “Grey’s Anatomy,” “Scruples,” “Vampire Diaries,” and “Venice The Series.”