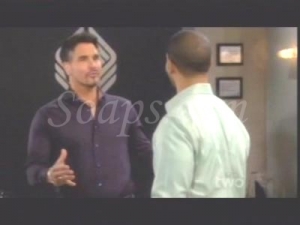 So tired of this! (Soaps.com)

This week brought us round three of ‘Liam, Hope, and Steffy go on location while Bill manipulates’. As much as viewers may love the show, and understand the need to build up the younger generation, there’s simply no denying the frustration with the ongoing focus on this same triangle and the repetitiveness of these on location themes. Here’s the breakdown:

Out of the picture.
At this point it would be amazing to see Bill do something other than pace around his office and enact diabolical schemes concerning Liam. How quickly he’s forgotten that Liam found out about all of his previous plots and nearly disowned him to boot! His three-day argument with Justin this week became very repetitive, and it just seems both of these characters could be doing much more interesting things. Also, can we get the white tufts at the side of Bill’s head dyed? He’s beginning to resemble a male Cruella de Ville. For insight on Bill and Katie’s storyline, read Soaps.com’s interview with Heather Tom.

Cutting loose.
It will be interesting to see how Amber will play her cards now that she’s lost Hope’s backing. It was curious that Hope didn’t rat out Amber to Brooke as her dealer. Guess they’re saving that little nugget for later.

A little extra ‘oomph’.
It was funny how Steffy described Hope’s pill popping as a ‘little extra oomph to get through the day’ – very diplomatic. As for Hope’s contention that Liam is all she needs in the way of support now, that’s a bit of a heavy anchor to hang around a young guy’s neck. I don’t think it bodes well.

On the wings of love.
Steffy sharing a flight with Liam and Hope was awkward at best, dumb at worst. Why didn't Hope and Liam take the Spencer jet? In any case, it's hard to believe these three are on their third 'trip' with basically the same tug-of-war and events occurring. Tired.

Take two Aspen and call me in the morning.
Between Steffy being watered down, Liam being the least dynamic object of love's desire ever, and Hope's annoying laughter, this trip to Aspen hasn't started off looking too good. That said, the bit with Hope being chased by the paparazzi set to the Monkees' tune, 'Last Train to Clarksville', was just cute enough to save Friday's episode from being a complete dud. Let's hope something extraordinary happens next week.

How would you tweak the Hope/Liam/Steffy triangle? Let us know by voting in Soaps.com's Triangle Touch-Up poll.