The Bold and the Beautiful Interview: Heather Tom

Soaps.com: Speaking of conflict, Katie and Bill have had their fair share the past year or so. Katie has persevered through Bill plotting to kill Amber, nearly leaving her for Steffy, locking her in a tower, not to mention repeatedly doing things to tick her off! How do you explain her staying in the marriage?

Heather: [laughs] You know, even though Katie 'left him' at one point, she never walked out on him in the regard where she's not trying to come back; trying to find her way back. I really don't think she's the girl who cuts and runs, even though that's what he's accused her of. Walking away from someone is sometimes tough love; you have to do these things in order to make effective change. I think that is really where her motivation has always been. It would take a lot for her to walk away from this relationship - she feels like this is the man she loves, she understands who she's married to - she knows she didn't marry a boy scout. That volatility is something that draws her to him, and at the same time I think she feels like he can be a better person and it's inexcusable for him to fall back on the easy side of things and more manipulations. She's there to correct him and to love him through the situation. It's far more interesting to watch someone try to stay, than it is to watch someone run. Ultimately, when and if they do break up, hopefully the stakes will be that much higher, and the reason for the demise of their relationship or separation would have to be something big. Hopefully that gives people something to invest in, rather than a relationship that basically every five minutes they're breaking up. She knows what she got herself into and tries to make it the best it can be.

Soaps.com: Has it been fun to play the conflict between Katie and Steffy?

Heather: I love it! [laughs] I couldn't ask for a better nemesis. I think [Jacqui's] wonderful and her character's so much fun. She does such a beautiful job of it; balancing the bitch factor with having so much heart at the same time. That's what makes the scenes interesting, is that they're both coming from a valid point of view. Again, it's much more interesting to watch a fight between two equals, rather than watch a fight with someone who always gets to win or who is always right. Are we ever going to be friends? I hope not! [laughs] I hope that they continue the rivalry - Steffy pushes every button that Katie has - I don't see that ending anytime soon.

Soaps.com: Recently, Katie and Bill have been largely focused on the love triangle of Hope/Liam/Steffy. Fans have been hoping to see them get their own storyline again.

Soaps.com: Well, spoilers are indicating that Katie will have some big news to share coming up. What can you tell us?

Heather: It's definitely big news and I think that the reactions will be unexpected. Hopefully it's fodder for good story. I think it's time for us to stop meddling in who marries whom - it's very important of course - but at some point we need to get our own lives.

Soaps.com: I think a lot of viewers would agree with that! Some are speculating that Katie’s news will involve a pregnancy. Hypothetically speaking, would it be dangerous for Katie to carry a child considering the situation with her heart – enough so as to cause her family concern?

Heather: Her heart is kind of a ticking time bomb in her chest, so I think anything that puts her in a vulnerable situation, certainly the heart would come into play.

Soaps.com: How do you think Bill would react?

Heather: I don't know, that's a good question. He's someone who, although he kind of had to learn to be a family man, is seriously protective of his family. So, it would be an interesting conflict between the two of them, if indeed it did go down that way. It certainly would be interesting for Don to play - the push and pull between having something that is your flesh and blood, and there being the potential for harm to Katie.

Soaps.com: If Katie’s storyline were to change, what would you like to see her do?

Heather: I hope it does change at this stage [laughs], right now I'm a little bored. I always like her when she is kind of running the show; in the boardroom. I like her when she is calling Bill out. I would love to see the Bill/Steffy triangle continue or evolve. I like the idea of this family kind of expanding; it's lovely to have Karen (Joanna Johnson) on the canvas. I think that's very cool, and having Katie involved with her. I think it's great that they're bringing on all these Spencers, hopefully there's a lot of story there.

Soaps.com: Finally, your fans want to know, of your three Daytime roles, Victoria Newman ("Y&R"), Kelly Cramer ("OLTL") and Katie Logan Spencer ("B&B"), which has been your favorite to play?

Heather: They all have been very special and unique and all have a special place in my heart. Obviously Victoria's a character that I created, in that I grew up with her. Kelly was fun to play because she was just so different - the polar opposite of Victoria - and had this kind of crazy, ditzy side to her that was fun. But, I'm having a really good time with Katie. I like the fact that she kind of started off in one place and has evolved into this other person. I think that's always fun, to see a character grow and change, and not have to be locked into one thing. She's a character who is capable of making mistakes, and being too self-righteous - it kind of bites her on the ass every now and then - it's nice to see that happening and it's exciting to play a character that can be fluid and move from situation to situation. So, I'm having a really good time with her and I love Bill and Katie. I feel so blessed to have the other person; it's important on Daytime to have that, and it makes it fun to go to work every day.

Read more about The Heiress. 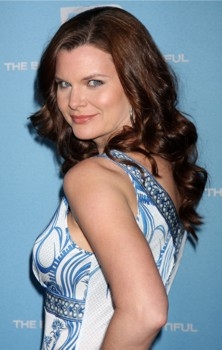 Soaps.com recently had the opportunity to chat with Heather Tom (Katie Logan Spencer) about her upcoming stage role in “The Heiress,” as well as her role on “B&B.” Keep reading to find out how she feels about Katie’s marriage, her rivalry with Steffy, and more!

Soaps.com: You’re currently in rehearsals for the stage production of “The Heiress.” Tell us about the play and your character.

Heather: Sure, it’s inspired by the Henry James novel, “Washington Square,” and it takes place in 1850. I play Catherine Sloper, who is a wealthy girl but pathologically shy. She has a very dysfunctional relationship with her father; her mother died in childbirth, and he kind of blames Catherine for it, so that affects her behavior. She is being courted by this young man, who she falls in love with, but her father feels that he’s just after her money and is not really interested in her, so he proceeds to pretty much make her life miserable! There’s a nice little twist at the end; the gist of it is that she finds her voice through adversity. It’s a beautiful play, one of my favorites actually, so I’m thrilled to be a part of it.

Soaps.com: You are sharing the stage with Richard Chamberlain and Julia Duffy. What’s it been like working with them?

Heather: It’s been wonderful, the entire cast is great. It’s been a fairly easy rehearsal process; everyone just came in ready to hit the ground running and work hard. They’re fantastic. I’ve been so lucky to work with so many wonderful older male icon actors, and Richard Chamberlain is one of them. It’s wonderful to sit back and learn from him, and Julia is funny, and really smart; just a cool lady.

Soaps.com: You’re no stranger to doing theatre. What is it that draws you back?

Soaps.com: When does “The Heiress” open and for how long will it run?

Heather: We start previews on Tuesday April 24, and then we open April 29 officially. It runs three weeks, though we may extend an extra week, and it’s Tuesday through Sunday. [For times and tickets visit Pasadena Playhouse].

Soaps.com: You’ve also taken some guest roles in Primetime television shows – most recently “Criminal Minds.” What was that like, and do you have any others coming up?

Heather: Right now doing double-duty with the play and “The Bold and the Beautiful” has been very busy, and they’ve been so wonderful to work everything out for me – split days where I go to work in the morning there and then go to rehearsal in the evening or early afternoon. It’s great to have that support group. But it’s been great to do other sets, and “Criminal Minds” was a fun part; super-dramatic, and it was great to see Shemar Moore (ex-Malcolm, “The Young and the Restless”) again. It was lovely to have that opportunity.

Soaps.com: “The Bold and the Beautiful” recently celebrated their 25th anniversary. It must have been pretty amazing to be there for that milestone.

Heather: It was great! They were doing all kinds of things, like a photo shoot for “Vanity Fair Italy.” It’s been wonderful to be a part of this group and hopefully we have another 25 years in us!

Soaps.com: I hope so! You received a Daytime Emmy pre-nomination this year, and with good reason. You’ve done excellent work, particularly in scenes when Katie rages, cries, or becomes intense when in conflict with another character. How do you get yourself there?

Heather: Well, my method is really just putting myself in the middle of the moment; the middle of the situation. The great thing about Daytime is that the stakes are always so high. Very rarely are you dealing with something that’s anything less than life and death [laughs], so if you really commit to the stakes being that high, then it’s easy to just lose yourself in it. I also trust the other actors that I’m working with, and thankfully the scenes that I’ve had like that have been with people like Don Diamont (Bill) and Jacqui Wood (Steffy). I feel very comfortable and very safe in those scenes to just let go, and I know that they’re going to be right there with me, and hitting the ball back. Those scenes are my favorite, they’re fun.

The Bold And The Beautiful Saturday Teaser Poll: Bill's Plan

The Bold And The Beautiful Spoiler Video: Warnings