Steffy stepping stone.
The chemistry between Liam and Steffy is certainly more adult and more interesting than the high school/fairytale romance bit going on between Liam and Hope, but I feel so done with her waiting around on this guy. Even their conversations are about Hope, and her conversations with her mother and brother are about Hope. It's boring. Steffy needs to move on or take a new approach to the situation. Should Steffy move on? Vote in Soaps.com's Steffy’s situation poll.

Dayzee danger.
Dayzee's little public service announcement about buying drugs over the internet was good advice. That said, it seemed like Dayzee was mothering/lecturing poor, stupid Amber, which did nothing for the appeal of either character.

Cootie line.
The Donna and Pam stuff is a little over-the-top, but fun. Let's just pray they don't end up sitting at their half desks all day discussing Hope and Liam! 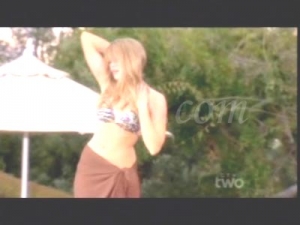 Even though Hope’s struggles have made her more interesting as a character, it’s fatiguing for viewers to have all the focus relentlessly on one person, which is what seemed to happen again this week on “B&B.” Let’s take a look:

Pool party.
Any hopes viewers had of getting to know Caroline better were dashed when Hope showed up at the party, did a hoochie dance on the diving board, and then topped the day off by nearly drowning. Sure, we got to see a bit of Caroline and Rick flirting, but Rick’s pick up lines were cheesy, and we were none the wiser about what makes Caroline tick. So far, she’s been disappointingly straight-laced despite the racy exit from the limo when she first rolled into town. At least we can thank her for getting Thomas and Rick poolside this week – eye candy!

I’ve been keeping something from you!
Liam has to be the world’s biggest idiot to have been surprised by Hope’s revelation that she’s been taking drugs. If the inappropriately loud laughter and lightheadedness didn’t tip him off, you’d think the new vocabulary (chill out!) and stripper dancing would have! Too funny. In any case, predictably, it was fine for Hope to lie and keep a secret from him – just all the more reason to be supportive…

The Bold And The Beautiful Spoiler Video: Amber's Question

The Bold And The Beautiful Saturday Teaser Poll: Caroline's Decision