On shaky ground.
Hope has extreme withdrawal symptoms when she's in between pills. Pretty dramatic considering Dr. Barton only gave her two pills, and she's only taken about two of Amber's! Also curious is the way she behaves like she's drunk, as opposed to being 'mellow' while on the medication - bizarre! That said, the exaggeration has been entertaining. Hope stole the scene twice during Caroline's party - once when she smacked Liam while chatting with Katie and Bill, and later dancing her little jig in the background while Amber was talking to Caroline. Hilarious! At least Brooke asked if she'd had too much champagne - finally someone noticed!

Holy harpy!
A pet-peeve with "B&B" is the sometimes very repetitive dialogue - it will drive you snaky! Case in point, Brooke harping on Rick this week about Amber versus Caroline. She repeated the same thing to him every time he came into her line of sight and was like a dog with a bone - no matter what he said she just kept going on and on! Gah!

Sweet Caroline.
The arrival of the 'new' Caroline and the developing triangle, or quadrangle, with her, Rick, Amber, and Thomas, shows promise. I'd like to know more about her however. Is she edgy? Shrewd? Is she worldly or has she been sheltered? What gets her clock ticking? I can't root for her with either of the guys until more is revealed. As for her time in the guesthouse with Ridge discussing her aunt, it was very moving. The flashbacks had me choked up, and it provided necessary background information on who the character was, and how her niece ties into things in L.A. Are you rooting for Rick or Thomas to end up with Caroline? Vote in our Caroline’s choice poll. 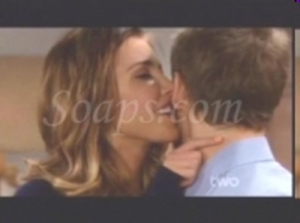 Well, Hope is now sharing the “B&B” spotlight with Caroline, which has brought about some welcome variety. Notably, there’s a certain amount of history repeating itself, which can be a good thing in that “B&B” has had great success in the past with its formula involving meddling matriarchs and love triangles, but the repetitiveness leaves longtime viewers seeking fresh angles and something more imaginative than just re-playing the old stories with younger characters. Let’s peek at the week:

Take as needed.
Bah! Amber being written as a brash twit who makes the same mistakes repeatedly isn’t working for many who watched her mature and mellow in Genoa City. She has more than enough experience with failed schemes to know that giving Hope pills will backfire. As for going up against Brooke, the only good thing about it so far is Amber reminding Brooke that she, better than anyone, should know where she’s coming from. It’s a real do-over of the Brooke/Stephanie scenario. Here’s hoping that means Amber will land Rick the way Brooke landed Ridge – they ‘get’ each other.

Cha cha cha…
Steffy puts the ‘bold’ in “The Bold and the Beautiful.” It’s good she decided to return and not sulk anymore. The ‘cha cha cha’ line is slightly odd, and yet conveys her confidence, which is the best side of Steffy. It’s no doubt Liam missed her – she’s fun – although medicated Hope does give her a run for her money in that department! One thing that was strange this week – Steffy acting outraged by Hope taking a pill. So weird.

The Bold And The Beautiful Spoiler Video: Meant So Much

The Bold And The Beautiful Saturday Teaser Poll: Mix-Up