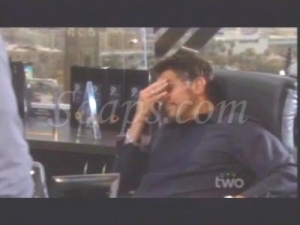 Fantastic to see some variety in the storylines this week! Here are my thoughts:

And the rest is history.
Loved the anniversary celebration of Eric and Stephanie as patriarch and matriarch! Felicia being there was amazing and way too brief. The few flashbacks we saw were a real treat – wish there had been time for more. The stuff with Hope/Liam/Steffy put a bit of a damper on the mood, and I could have done without it, but all in all it was an enjoyable gathering to watch – it’s always awesome when Eric plays the piano while everyone gathers around – classic!

Telling it like it is.
I don’t think insulting Hope is going to help Bill make his case with Liam, but his blunt assessment of her as a ‘headcase’ and his reference to ‘One Flew Over the Cuckoo’s Nest’ was certainly entertaining. It’s hilarious how he just comes out with whatever is on his mind – no filter! I also enjoyed Rick telling Brooke not to micromanage his life this week – always refreshing to hear a character speak what you’re thinking out loud!

Dirty looks.
Well, Hope became a proper little witch in Dr. Stacy’s office when more drugs weren’t forthcoming! I’m not sure she’d be such a rage case after popping two or three anti-anxiety pills, but it made the scene worth watching. I can’t wait to see her in full-on addiction mode. I wonder if clueless Liam will finally figure out that his girlfriend is on something? Incidentally, it was funny how the doctor told Hope on Friday that she doesn’t prescribe pills without seeing the person first, when that’s exactly what she did in the first place!

Cut the ties.
Who are Brooke and Ridge to say if Amber's a better person or not? Nice that Amber pointed out to Brooke that she was acting just like Stephanie, though it didn't seem to faze Brooke. In any case, it looks like Amber's getting a bum rap again as she is suddenly being dressed in frumpy clothes (presumably so she'll seem dowdy compared to Caroline), and is about to start blackmailing Hope (which will ruin her claims of being a better person). She matured while in Genoa City, so it's tough that she has to always be the loser in L.A. I'd like to see her catch a break.

Love in the afternoon.
Bill and Katie canoodling in bed got my attention, as did the scenes with Marcus and Thomas working out - hurray for eye-candy! It was nice to see Oliver a few times this week too.

Caroline Spencer.
Caroline made a good first impression - if only because her arrival gave us our first Liam/Hope/Steffy free afternoon in eons! What a relief! As for Caroline herself, she seems sexy and confident, and should have no problem making waves at Forrester Creations. I imagine there will be some entertaining material with her and Bill as well once Karen leaves town and he's looking out for his niece. Her look is a lot like Hope's, but I feel like she will distinguish herself fairly quickly. It will be interesting to see what Steffy thinks of her. What was your first impression of Caroline? Vote in Soaps.com's Caroline Spencer poll.