The Bold and the Beautiful’s Texas Battle Talks to Soaps.com!

With that issue settled, we moved on to talk about Marcus’ nemesis, Owen Knight. I wondered if there might be something more going on between the two than they’ve let on so far. All the actor would say is, that if he has his way, they will remain enemies. “I want Owen to always be Marcus’s rival. You know, just like you have Ridge Forrester and you have [Rick], or you have Ridge and Nick Marone. I don’t want to be friends with Owen, because I despise the guy. I think this is a guy who has another thing on his mind besides my mom. I think there is something else there that he’s trying to do. I just hope I’m not part of it,” he laughed and then added, “I hope I’m not a bad guy!”

With a background in film and primetime, Texas was as surprised as anyone that he landed on a soap, but he couldn’t be more enthusiastic or excited about being there. However, being a soap actor comes with plenty of critics, as Texas has learned first hand. Encountering his fair share of clichéd criticisms about being on daytime, Texas prides himself on defending the genre. “What’s wrong with daytime?” he queried. “The check’s great. The hours are lovely. I’m working everyday, pretty much. I get time off. It’s great to be around a great cast, great people. What’s so wrong about daytime?”

“I have to defend my fellow co-stars because people don’t understand how hard they work. How much dialogue it takes,” Texas continued. “Until you experience, or until you actually do it, hey, we work just as hard as they do on the film and [primetime] side. If you’re good, you’re good. Period.”

Even though he’s happy to be on a daytime show, that doesn’t mean he isn’t open to other opportunities. Before coming to B&B, Texas wrapped several projects that will be coming out later this year and next. The one he is most looking forward to is “Dragonball”, due out in 2009. Based on the Japanese manga series “Dragon Ball”, the film is an action/adventure/fantasy story that stars Chow Yun-Fat (“Crouching Tiger, Hidden Dragon”) Justin Chatwin (“War of the Worlds”) and James Marsters (“Buffy the Vampire Slayer”).

In the movie, Texas plays the school bully, Carey Fuller, opposite Justin Chatwin’s character, and he even gets to do a little stunt work. “I got to smash a car. I got to jump in the air and act like I’m doing some acrobatic Kung Fu stuff, which I’m not, but I am in the movie,” he chuckled.

While Texas waits to see if “Dragonball” does well enough to warrant a sequel, he is more than happy to spend his time delving into Marcus’s past, present and future on B&B, stating, “I’m going to enjoy myself and when my time’s up, we’ll see where I’m at. Because honestly, if everything goes correct and I’m having fun and I’m living my life, then hey, you never know, you might see Texas Battle on B&B for a while.”

While we wish him success in all his other endeavors, we here at Soaps.com hope to see Texas mix things up on B&B for a long time to come! 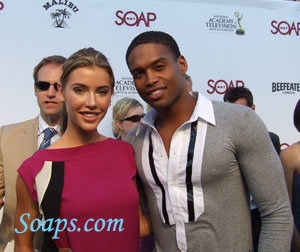 You wouldn’t exactly expect a former college basketball player with a degree in kinesiology to end up on a soap opera, but that’s exactly what Texas Battle did. He came on The Bold and the Beautiful with a bang, as Donna’s long lost son Marcus, just a few months ago and continues to remain front and center. I recently had the pleasure of talking to Texas and discovered just how excited he is to be on show and how he has become one of daytime’s biggest supporters.

After graduating from the University of Texas, Battle set out to become a model, but since he had basketball skills, he was sent to audition for, and landed a part in, the Samuel L. Jackson movie, “Coach Carter”. Not bad for your first time out! From there he earned roles on TV shows such as, “Committed”, “All of us”, “One Tree Hill” and “12 Miles of Bad Road”, as well as appeared in the films, “Final Destination 3”, “Even Money” and “Wrong Turn 2: Dead End”.

During the writer’s strike earlier this year, Texas got a call from his agent saying B&B was looking for a new younger leading man and since there wasn’t much opportunity for other work at the time, he decided he would “see how the soap world [was].” Of course, he was also persuaded to go on the audition by his friends who were in the business. Maybe you’ve heard of them? Josh Morrow (Nick, The Young and the Restless) and Thad Luckinbill (J.T., Y&R)?

“I talked to these guys beforehand and Josh told me, ‘Hey man, definitely. It’s a great experience; it’s a great gig. The Bold and the Beautiful is like a family. The cast is great,’” Texas recalled. “And that’s what I’ve always wanted to be a part of. It’s always good to be a part of a good atmosphere, a good cast, people that get along, love what they do, come to work, no prima donnas.”

Even though he was a little intimidated by the amount of dialogue he had heard soap actors were required to learn, Texas met with Brad Bell (executive producer and head writer, B&B) and discussed how the character would fit on the show. After ensuring the character would have a definite future, and talking more with Brad, he felt like, “They accepted me. I was like, this is where I need to be right now. So I said, ‘Why not?’”

The role of Marcus was not necessarily written for an African American actor, but when Texas learned he would play the son of Jennifer Gareis’ character Donna, who is white, he thought, “Wow this is different. This is a little drama stuff going on!”

Like most fans, Marcus is eager to learn all the specifics of his character’s past and deal with the race issue, which hasn’t even come up on the show yet, but as he says, all in good time. “We have to keep the fans watching! You can’t give everything up at once. You gotta drag things out. I’m on for at least two years. I’m like, ‘Hey! We can drag it out as long as we want to,’” he laughed.

He did hint that his character’s dad, “might be coming later” and all the other details, such as who his adoptive parents are, will eventually unfold. “I think the main thing that we are trying to get across is that it’s not a black and white issue [right now]. Let’s establish that I am Donna’s son first. Let’s do that. So I think that’s what we’ve accomplished, is that I am Donna’s son,” he said.

But is he really? There’s been no DNA test, or other proof to indicate this, which has left many fans wondering if Marcus is in fact scamming Donna. Apparently even Texas was concerned, as he went straight to the top for answers. As Texas recalled, “I even went to Brad and I said, ‘Am I really Donna’s son? Does he have a motive? Is it because they’re rich? Is it because he wants to get into Forrester Creations?’ I’m curious myself, but [Brad] tells me, “No! You’re Donna’s son. She gave you up for adoption. That’s what it is. You’re blood.” 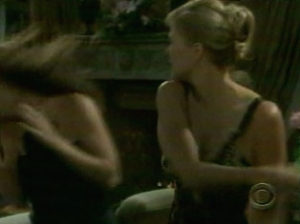 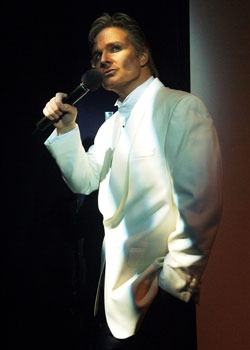