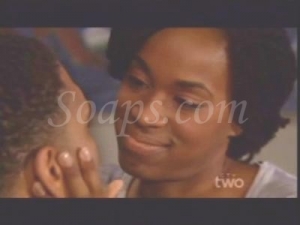 The Hope and Liam drama was broken up this week by some Stephanie and Brooke scenes, some Marcus and Dayzee scenes, and some comic relief. Check it out:

Denial.
Dr. Stacy has her work cut out for her! Hope showed up at therapy this week claiming to be blissful now that Steffy’s left town, and ‘over’ Brooke accidentally boinking Oliver at her graduation party. Considering the flashbacks, I’d say she’s got a ways to go yet. It was interesting that Hope’s father, Deacon, was brought up in the session. I’d love to see him back on “B&B,” as long as he would be allowed to stir it up like he used to, and not be limited to discussing his daughter’s love life. Anyway, I was annoyed at Hope telling her therapist that everything was on track and hunky-dory when she’s popping pills in order to handle intimacy with Liam – ‘fess up!

As long as you don’t cook.
The Brooke/Stephanie scenes were so good this week as always. Stephanie’s facial expressions as Brooke gushed all over her were hilarious, as were her droll one-liners. I would have enjoyed seeing more flashbacks though – this pair has had so many memorable scenes. Stephanie and Brooke facing off over the Hope/Liam/Steffy triangle has been ideal because (so far) they are butting heads, but not at war.

A bad feeling.
Katie back-pedaling with regard to her advice to Hope was a realistic story point – it makes sense for her to question her motives in advising Hope to go ahead and be intimate with Liam, given that they easily could have been colored by her desire to get back at Steffy. What still puzzles me is that Katie never once, even in her own thoughts, seems to worry that a single Steffy might present a problem for her own marriage – now that would be a realistic concern.

Step-Mommy.
I loved Marcus's proposal to Dayzee! Sure, they haven't been written as one of the most exciting couples to hit Daytime, but Marcus comes across so genuine and subtly sexy, and Dayzee is a breath of fresh air as a soap character. The proposal made me smile. It was only tainted by the spotlight immediately swinging back to Hope. Marcus and Dayzee even spent time discussing the Hope/Liam/Steffy triangle while celebrating alone later - overkill!

Hypocrite.
I guess there's nothing like seeing someone who has put themselves on a pedestal take a tumble, because it was hard not to relish Maggie's mother confronting Hope in the cafe. That said, I have to agree with Liam that it was utterly over-the-top - she was reacting to a kiss between a single woman and a man who is legally separated, and this isn't the dark ages. In today's world most people move on with their love lives once they are legally separated. However, in Hope's case, she set herself up for such a reaction by publicly declaring herself to be a paragon of virtue, so she'll have to deal with the fallout of her subsequent choices now. Bottom line - I'm exasperated with Hope and her storyline, and am relieved to be able to find some comic relief in her new zest for pill-popping. Isn't it awesome how addicted soap characters quake, sob, and/or gasp dramatically until they get that pill into them? Love it. How about Hope's laid back attitude and wacky laughter later? How could that dumbass Liam not have realized she was on something! Is Hope the worst kind of hypocrite? Vote in Soaps.com's Hope poll.

Tabloid train wreck.
You had to laugh at the scene at Forrester with Ridge ranting about the PR nightmare and demanding that Hope move out of Liam's place. Of course Brooke narrowed her eyes at him in outrage, and Hope stomped her foot and refused. Then there was Bill over at Spencer, practically rubbing his hands together with the glee and luck of it all - what a bunch!