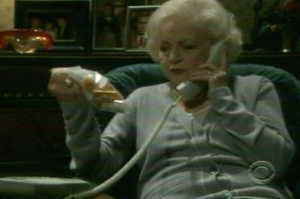 Even though she’s rarely seen on B&B anymore, that doesn’t mean Betty White hasn’t been keeping busy with other projects. Aside from her recent appearance as Ann, to warn Stephanie that Pam stopped taking her medication, the 86-year-old actress has been working on two upcoming films.

Next, White will be seen in the 2009 film, “The Proposal”, where Betty will play the character, Grandma Annie. Starring Sandra Bullock (“The Lake House”, “Speed”) and Ryan Reynolds (“Definitely Maybe”, “Just Friends”), “The Proposal” is a romantic comedy about a young assistant who is pressured to get married by her boss in order to avoid getting deported to Canada.

White’s fifty plus career in show business has featured her in hit TV shows, “The Mary Tyler Moore Show”, “The Love Boat”, “Who’s the Boss”, “The Golden Girls”, “That 70’s Show”, “Boston Legal” and even roles in “Santa Barbara”, “Another World” and of course, The Bold and the Beautiful.

Soaps.com is thrilled Betty continues to expand her long and highly successful resume and wish her continued success in finding roles she enjoys playing.