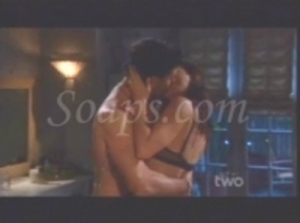 Best of the week. (Soaps.com)

Well, “The Hope Show” had its moments this week, but on the whole I continue to wish for more exposure for the likes of sexy Bill and Thorne, who still have what it takes to thrill the younger demographic just as much, if not more, than the likes of Liam, Oliver, and Thomas. The best of the week was Eric and Stephanie’s visit from Gladys Pope – hilarious! Getting right to thoughts:

Shirtless wonder.
The highlight of the week for many female viewers was Bill doffing his shirt for a sex-scene with wifey. Did I care that they were discussing Hope? Not once the shirt came off. Before that, it struck me as strange, but then again, Hope is the only thing the adults on this show discuss any more, so it was hardly surprising.

Not giving up.
I really got the sense that Steffy truly loves Liam as she spoke to Brooke this week – or truly believes she does. It will be interesting to see what she will do once news of the ill-fated Liam/Hope hook-up makes its way to her.

Fireworks.
So it seems the only fireworks happened outside Liam and Hope's bedroom. It just confirmed what we've all known for a very long time now - Hope built this up way too much, for way too long, and isn't ready. I did feel bad for the girl, but the whole thing was terribly predictable. Brooke suggesting Hope get counseling to make things right for Liam was, um, bizarre. In any case, getting into Hope's head isn't a very exciting prospect, but I'm hopeful that Stacy the counselor will make things interesting! Vote in Soaps.com's Hope poll.

The sword necklace.
I hate to break it to Liam, but the only reason that Bill didn't bring up Steffy or criticize how Liam was handling his life on Friday's episode, is because he was feeling smug, knowing that Liam's night with Hope fell as flat as he predicted. Anyway, Liam put the sword necklace back on, so it seems these two are back on track - for now.

My hands in your dirt.
It's been great seeing more of Stephanie - she adds a unique flavor to the show. She and Taylor bickering about Steffy earlier in the week made for a couple of great scenes. Likewise, the return of Gladys Pope to marry Queen Stephanie was brilliant. Tons of comic relief, a heart-warming remarriage, and no mention of Hope/Liam/Steffy - best of the week!