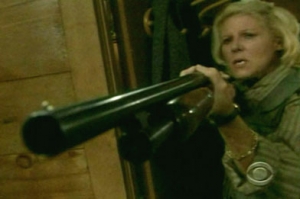 B&B Breakdown for Week of August 25

Even though it was pretty obvious who the culprit in Eric’s poisoning was, (did anyone not recognize Pam’s voice when she was strangling Donna?), the build up to the reveal was fast paced and interesting.

I’m not sure I bought how quickly Donna believed Owen though. I mean, couldn’t he have broken into Donna’s room, trashed it and planted the drugs, or arranged for it to happen? Regardless, he didn’t do it, so her believing him worked out.

Stephanie’s visit to Owen at the police station was not what I expected and that was a good thing. I thought she’d come in yelling and screaming at him, but instead she was very controlled in her anger. She was furious, but maintained her composure while getting her very pointed threats across to the man she thought poisoned the love of her life. I thought that was a great and more effective choice, because we’ve seen enough people blowing up and screaming at each other on this show. Now, Steph has to deal with the fact that it was her sister who almost killed Eric and not Donna, who she viciously accused. Should be interesting.

Where are Felicia and Thorne? Eric is their father too, shouldn’t they be around more? Not to mention Bridget. Was she even on this week? I get that it’s a short show and there’s only so much time to have characters on screen, but come on! They gave Rick a scene at the hospital with Stephanie, couldn’t they have thrown Felicia and Thorne in there at some point too? I suppose they’ll be around to learn it was their aunt who poisoned Eric and then they will react however Ridge instructs them too. It would be nice if after this story ends, they are given their own storylines, but that may be too much to hope for.

I appreciated the fact that Lt. Baker didn’t buy Owen’s story. When it’s obvious to the audience and some of the characters, it should be obvious to the police that Owen confessing only after Donna was arrested was suspect. Although, the younger Baker bought the story hook, line and sinker, but he’s young, he’s still got a lot to learn.

I thought it was funny that the in-shape Charlie ate a salad, while his not-as-fit father ate a hot dog with a coke while they discussed the case. Not crucial to the story, but a nice addition to the scene. I think Charlie could be a worthwhile character given the chance. Maybe they could give him more to do than just showing up every couple of months to investigate the latest crime. Felicia needs a love interest, why not see if they have any chemistry? What do you guys think?

It piqued my interest when Marcus and Steffy were enjoying themselves at the cabana (while their families were falling apart around them) and Steffy said she doesn’t trust people easily, but that Marcus is different. Does that mean Steffy is going to live to regret her words and Marcus will turn out to be a snake? I hope not, but it got me thinking.

Now that we know for sure Owen didn’t poison Eric, and he’s even got Ridge on his side now, what will become of this character? I’m starting to like him and think he and Donna could actually make a good couple, although I think he has more chemistry with Felicia. Who would you rather see him with? And do we think he is a good guy now? He could still have secrets and a hidden agenda, which is what I hope plays out.

My cable went out so I didn’t see the bear scene. What were your thoughts on it? Too much, or just right?

So now the mystery is over and Eric is starting to wake up. Will Donna give in to Owen, or will she wait for her husband to return to her? I know a lot of you don’t think Donna is right for Eric, but I think she truly loves him. Although, her kissing Owen is a funny way to show that. I have no idea what will happen when Eric wakes up, but I’m pretty sure Donna and Stephanie will have a few confrontations over it!

What do you think? Please feel free to share your opinions, whether you agree or disagree with me. Just remember it’s all in fun!

Here's a bonus poll for the week:

Eileen Davidson Off The Bold and the...