Eileen Davidson Off The Bold and the Beautiful 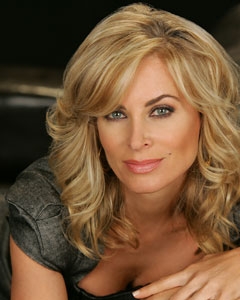 Although she came on strong on The Bold and the Beautiful in early 2007, Eileen Davidson’s Ashley Abbott hasn’t really been seen much over the past few months. So it should come as no surprise that Ashley is leaving sunny Los Angeles. However, that doesn’t mean the character is all but forgotten, as she is heading back to The Young and the Restless!

When Ashley left Genoa City, she took a position in Hong Kong, but soon found herself in L.A. She took a job with Forrester Originals to design a new fragrance and while there, hooked up with Ridge Forrester. She was also linked to the younger Rick Forrester, whom she previously had a fling with in Paris. Ashley eventually became engaged to Ridge, but that ended when the inevitable happened and Ridge went back to his long time love, Brooke. Since then, she sort of dated Storm, but quickly realized he was off his rocker, and she also showed up for business meetings, but hasn’t had much else to do.

Ashley made a cross over appearance on Y&R at Victor’s wedding to Sabrina in June and is now set to appear in the Y&R Paris scenes this fall. Since Victor is newly single again, will this mean Victor and Ashley find their way back to each other? Or will Ashley simply be a shoulder to lean on for the grieving Victor?

Time will tell, as Eileen Davidson is scheduled to permanently return to The Young and the Restless on September 26. While Soaps.com is disappointed to hear Ashley has officially left B&B, we are happy to know she is heading back to her home in Genoa City!