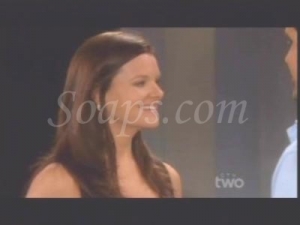 Once again, the show mainly revolved around the Hope/Liam/Steffy triangle, though a few more elements were added, and the Marones got a bit of screen time. Check out some points on the week’s events:

Paws off my man!
Amber’s reaction to seeing Rick hug Steffy was hilarious – she’d fit right in on an episode of “The Jerry Springer Show!” Seriously though, I felt for Amber, who never seems to get a break, so it was a relief for Steffy to assure her she wasn’t interested in Rick. I’d actually get a kick out of seeing a friendship spark between these two – oh the trouble they could cause. However, I suspect that they will become adversaries instead, either because Rick will fall for Steffy for real, or Steffy will decide to use Rick to make Liam jealous. Vote in Soaps.com’s Amber and Steffy poll.

Straight talk.
It’s so entertaining how Stephanie just states whatever she thinks so bluntly. Maybe the cancer scare taught her not to waste time beating around the bush – life’s too short! Even Brooke was slightly taken aback when Stephanie declared that by speaking to Liam about Steffy she was trying to spare Hope from becoming a common homewrecker like Brooke and her sisters! Next, she bowled Liam over by admitting that she actually agrees with Bill about his marriage. Such good material!

The choice.
I actually found Katie’s advice to Hope to be quite reasonable – sleep with Liam, keep it to yourself, and don’t even let your public know. The problem? Katie, Brooke, and Hope were all so excited about it that they blabbed it all over town. I mean, Hope went straight over to rub Steffy’s nose in it – the one person who could, and would, happily torpedo the Hope For the Future campaign. It’s weird enough that the adults on the show have been fixated on the younger set’s sex lives (or lack thereof) for months on end, but now that it’s supposedly happening, Hope seems most excited about ‘taking Steffy’s power away’, Katie's telling Liam how thrilled she is he'll be sleeping with her niece, and is beaming because her hubby Bill is ‘losing’. Brooke, meanwhile, is so gushy over the impending de-flowering that you almost get the sense she’d like to be there to make a memory album of the occasion, and the men in the family are all weighing in on how good it will be and who might get hurt! You just have to laugh!

Stay.
The tables have indeed been turned on Steffy, but I was hoping she wouldn’t handle it by crying and begging Liam not to sleep with Hope – it’s disappointing to see women always reduced to a shell of their former selves over a man (and a wishy-washy boy/man at that). I would have preferred that she walk over and pick up the phone to make a date with Rick and let Liam stew in it.

Pass the boyfriend.
Bridget passing Owen back to Jackie is just as much of a head-shaker as Jackie handing him over to Bridget in the first place. Are we really supposed to believe that Bridget and Owen didn’t have sex the entire time they were together? Really? Owen and Jackie really do have great chemistry and it was amazing to see them reunite, but once again viewers are asking what was the purpose of this totally strange out-of-the-blue storyline?