The Bold And The Beautiful’s Jack Wagner On Dancing With The Stars. (UPDATED.) 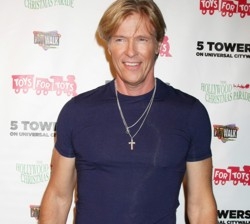 Jack Wagner and his partner, Anna Trebunskaya, were eliminated from Dancing With The Stars tonight, after three weeks of terrific dancing. Jack went out on a high note as the judges had deemed his samba on Monday April 2 his best performance yet. Jack was gracious about his departure, wishing the remaining contestants well.

“Dancing With The Stars” host Tom Bergeron announced the new cast live this morning on “Good Morning America” and “B&B”‘s Jack Wagner is confirmed as one of the latest celebrity hoofers.

The 14th season will have a two-hour premiere March 19.

According to a report by TMZ, Jack Wagner (Nick) may be appearing on the next season of Dancing With The Stars, which begins in March. Jack’s website, Wagner World posted the following: “TMZ has just posted a story that Jack will be on the up and coming season of “Dancing with the Stars.” This is not confirmed and probably won’t be until Tuesday morning when they announce the new cast on “Good Morning America.””

Stay tuned to Soaps.com for more information as it becomes available. Read about Jack Wagner off-contract at B&B. Join us on Twitter @soapoperafan and Facebook. Come tweet and Facebook with us about “The Bold And The Beautiful,” all the other soap operas, “Glee,” “Grey’s Anatomy,” “Vampire Diaries,” and “Venice the Series!”