The Bold and the Beautiful Weekly Blog 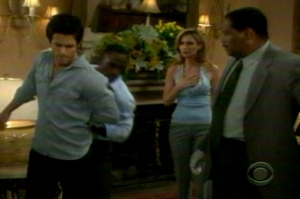 I really enjoyed this week. I loved how Marcus frantically went all over town trying to get someone to believe him about Owen while Ridge was convincing his siblings that Owen is the reason their father is alive. The build up to the face off at the Forresters was pretty exciting and although I think it’s pretty obvious who Eric’s attempted murderer will turn out to be, the story has kept us guessing. However, I did find it a bit much that Det. Baker brought Donna’s underwear down with the pills he found. Couldn’t the pills in her drawer have been enough to implicate her without involving her panties?

What was all that with Stephen bemoaning how Eric has brought so much pain to his life? Were we to believe that Stephen could have poisoned Eric? If so, it didn’t work on me. I just thought the scene was misplaced.

And Stephanie is back! She’s definitely the centerpiece of the show, so it’s great to see her back in fighting form. Although, they kind of dropped the ball on her depression. Did she snap out of it or is she still battling it, but rallied to support Eric? I do hope they at least touch on that again.

I don’t believe Owen poisoned Eric, but where will that leave him? Is he truly just a sap for Donna, or is there another agenda there? I hope there’s another agenda because if it’s the former, that would make the potential he has built up as an interesting complex character go out the window. I truly hope Owen and Marcus have some deep seeded secret that will come out once Eric regains consciousness and the real culprit is put away.

Just when I thought we were going to have a Nick and Katie free week, we were subjected to them on Friday. I’m just a little tired of Katie’s self-loathing, Nick’s conflicted feelings and Bridget’s cluelessness to the situation. I enjoy a good dramatic story arc, but I much prefer the multifaceted dynamics surrounding Eric’s poisoning to the one note angst ridden love triangle that we’ve seen several times over. And how hilarious was it that Nick came to the hospital in a baseball hat! Like that’s going to keep Bridget or anyone else from recognizing him. If they really wanted to keep it a secret, wouldn’t they go to a different doctor or at least meet somewhere else for Katie’s appointments?

Next week has a lot of promise as the fallout of Owen’s arrest continues. I for one can’t wait to watch Stephanie go off on Owen when she confronts him in jail!

Those were my thoughts, so what about you? Please feel free to agree, disagree or rant about something I left out, just remember it’s all in good fun!

The Bold and the Beautiful's Ronn...