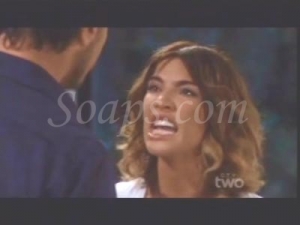 We were treated to some powerful scenes this week as Bill’s deception was revealed on “B&B.” Here are some thoughts on the latest developments:

Who does that?
It was hilarious that Bill locked Katie in the tower, though what he hoped to accomplish besides making her even angrier, I don’t know. Being serious, it will be interesting to see what Katie does about her marriage after all of this.

Role model.
Brooke convincing Hope to continue with Hope For the Future by telling her things might have been different for her if she’d had a role model like Hope when she was younger, made for an emotional scene. It also raised the issue of how many teens would realistically relate to a young woman in Hope’s position. Also, at times, it seemed Hope wanted to sleep with Liam, but something else was holding her back (other than her message) – perhaps she does have issues because of her mother?

Freeing himself from the lies.
Liam needs to start by telling himself some truths. When he was with Hope, he was looking at photos of Steffy, and since he married Steffy, he's been looking at photos of Hope. If he reconciles with Hope, he'll probably pine for Steffy as soon as something doesn't go his way. He could have been a real prize, but he's not. Also, if he's so hot on telling the truth, perhaps he should have admitted to his wife that Hope was on his mind the entire time they were together. Everyone has a point to make in this, but the bottom line is that Liam needs to go off with Hope and explore what it is he thinks he's missing, and I think it should be Steffy's idea, because clinging onto the marriage when he's clearly not that into her is not a good look.

Outrage.
There were numerous very powerful scenes as those affected by Bill's deception confronted him - loved these! Bill eating crow on Friday's episode was decidedly eye-opening as well - especially him allowing Hope to tear into him. Bill didn't stay in grovel mode long though - he was back to insisting Liam honor his wedding vows by episode's end. Vote in our Liam forgiving Bill poll.