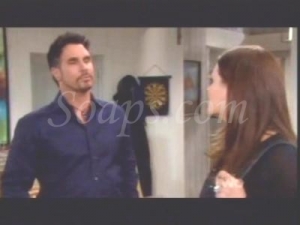 Things were really moving along this week on “B&B,” and some real drama is developing in several storylines. Let’s break it down.

Stay out of it.
Ugh…honestly, if I was Liam, at this point I’d opt to stay with Steffy just to irk Brooke and Katie who have been haranguing the hell out of him on a regular basis. It seems a foregone conclusion that Liam and Hope will reunite, and that’s fine, but terminally boring, so I’ll still be watching for some twist to occur – perhaps courtesy of Steffy – that might change the dynamic.

She knows.
Wow, Bill’s really dug himself a hole this time. I don’t see how he can stop Katie from exposing him, and no one will be on his side, including Steffy. Also, because he’s been bribing doctors, it will affect his image in the business world as well. Yike. Oh well, it’s been funny watching Justin listen to Bill’s excuses and tell him, “Whatever you say, Bill.” He knows it’s going to bite Bill in the butt! As for Katie, I’ll be amazed if she stays with him.

Oh, arrogant one.
Here’s hoping Rick and Amber cause a ruckus over at Forrester. It’s about time Ridge went down a notch simply due to the way he deals with family members. Amber and Rick also have chemistry out the wazoo, so pairing them romantically is a bonus. I’m hoping Marcus will get jealous if Rick starts bonding with Rosie and they play that angle. Rick and Marcus are both Eric’s sons, which could be another source of rivalry.

"Let’s Make a Deal."
Oh, I got a big kick out of seeing Pam drag Nick on "Let’s Make a Deal!" It’s amazing that Nick doesn’t even have to speak – his facial expressions convey everything he’s feeling and it’s just hilarious. Pam and Donna are funny too, but are a bit more over-the-top. The big question now is...will Donna expose Nick and Pam?

Fairytale princess?
Beverly’s pep talk to Hope was one of the most tedious scenes in a while. The dialogue seemed so unrealistic – who talks like that?

Bold And The Beautiful's Jack...

The Bold And the Beautiful Saturday...