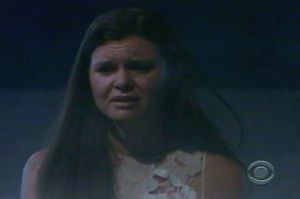 This week was certainly interesting with all the voices and visions people had. You would have thought you were watching Passions instead, but a much, much darker version.

Katie berating herself over being pregnant was a bit much. Get over it! You slept with your niece’s man, now live with the consequences and move on. And then seeing Storm was just really weird. It just seemed out of place for this show. Then there’s Nick’s reaction to the baby, like it was no big deal. Um, excuse me you’re married and someone else is having your baby. Your new bride might take exception to that and not see it as the miracle you do.

Speaking of Bridget, why does she feel the need to find a purpose for Katie and why is being Jack’s godmother the answer? Can’t Katie get a hobby or figure things out on her own? And who is Bridget to determine who Jack’s godparent will be? I think the boy has a mother and father to make those decisions for him.

Beth and Taylor’s therapy session didn’t have much impact on me except that I thought Hunter Tylo did a good job in those scenes. It was nice to see Taylor act in a professional manner, until that is she related everything to herself. I’m no doctor, but I’m not sure that’s necessarily professional. I also don’t think her treating her decades long rival’s mother and her lover’s grandmother is appropriate either.

Those scenes of Beth also reminded me of how they kind of dropped the ball on this story. Much like I complained last week about Marcus coming on strong just to kind of widdle away, what happened to Beth’s storyline? It was the focus for weeks and now it doesn’t seem important since she revealed what’s wrong with her. I suppose we all needed a little bit of a break from that story, but it’s like they completely forgot about it. Can’t they find a way to balance out story better?

What I am still enjoying is Ridge. I really felt for him when he was talking to Bridget about his father and he even admitted to believing that Donna loves Eric. That’s progress! This of course led to the shocking scene at the end of Friday’s episode where Ridge heard his father’s voice and then turned off Eric’s ventilator! So much for making the decision with the rest of the family. Which makes me wonder, why haven’t Felicia and Thorne visited their father this week? Maybe Felicia is too busy trying to find a new way to set Donna up.

The Bold and the Beautiful’s Ronn...