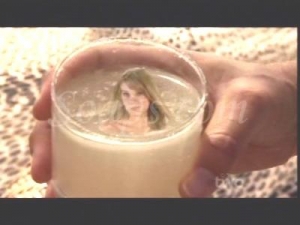 Well, there’s really just been the one storyline this week on “The Bold and the Beautiful.” Here are some thoughts on the recent happenings:

Tequila!
Last week in Cabo was such a drag, that it was totally unexpected when Monday’s show kicked off the week with a cheesy laughfest. Who could believe it when the Liam/Hope sappy background music played and Liam looked down into his margarita to see Hope’s head floating there? That gem was followed up by Liam being chased by Enrique and his mariachi band, and Hope getting tipsy on tequila. All of it totally ridiculous, of course, but being able to laugh out loud was a welcome change of pace from the tired, mired-down feeling this storyline has been inducing for weeks/months.

Who’s right?
Who’s wrong? Who cares? Liam was pining for someone else on his honeymoon, Steffy was withholding information, Thomas was ‘pushing’ Hope when he promised he wouldn’t, and Hope was dialing Liam’s digits when he’s a married man on vacation with his wife. Everyone’s guilty of something. I’m guilty of wanting this storyline to end, desperately.

Hospital hysteria.
There have been some pretty intense scenes in the Cabo hospital - it's never dull to watch characters getting up in each other's face - but it's hard to understand Bill going to so much trouble to stick Steffy with a husband who doesn't want to be with her. Here's hoping his bribe blows up somehow, or it's going to be weeks more of Liam pretending to be a good hubby while pining for Hope.

Her hero?
It sounded like Katie was coming to some sort of realization where her husband was concerned this week when she told Brooke he's capable of being a real hero when Steffy needs him to be. At this point, Katie needs to walk away and see what Bill will do then. Do you think Katie should dump Bill?