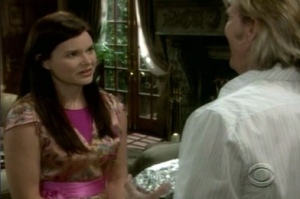 This is going to be a new weekly addition to The Bold and the Beautiful section of Soaps.com. It will consist of my opinions on what happened each week and will also give you another place to post your thoughts and reactions to what I have to say. Please feel free to agree or disagree with me below – just keep it all in fun. I will usually post this on Fridays, but since I moved last week I had to delay it until today.

Alright, enough chit chat, let’s get on with it!

So the big thing last week was Katie finding out she’s pregnant. It certainly adds a new level of drama to her triangle with Nick and Bridget, but how much is Bridget supposed to take? Her mother already slept with and had children with Deacon and Nick (okay so their kid was conceived on accident via Taylor) and now her aunt is having her husband’s child too? Instead of going down this road again, why can’t Katie get involved with Thorne or Charlie or even Owen? How about this? Owen is getting paid to set Donna up by an unknown person, but unexpectedly falls in love with Katie. Even though she reciprocates his feelings, Owen is forced to push her away because his boss threatens Katie’s life if he doesn’t complete his mission. While he gives Katie the cold shoulder, Owen can’t help but feel drawn to her and they embark on a push pull relationship (complete with Katie feeling jealous of the attention Owen pays Donna) until it’s revealed what Owen is really up to. That gives you mystery, a love triangle and betrayal – all classic soap opera elements. It might not be totally original, but wouldn’t anything be better than another Logan falling under Nick’s spell and hurting Bridget in the process?

Speaking of Owen, he was certainly creepy last week. I like that we don’t know exactly what his agenda is, but I hope they don’t completely send him over the edge of sanity. It would seem he’s setting Donna up for something; I just hope there’s some redeemable aspect to him when it all plays out. I like the thought some of you had that maybe he’s Sheila’s son or somehow connected to her and is seeking revenge on the Forresters on her behalf.

Along the same lines, I wish Marcus had a little more of Owen in him. Not necessarily the creepiness, but some edge or scandal or something. He came on with a lot of promise to make waves, but ever since Eric found out who he is, Marcus hasn’t done much except fall for Steffy. That’s sweet and all, but there needs to be more to him than that. Let’s bring on a father who he hates or make Marcus not be Donna’s son after all. Anything to make him not so nice. I liked how he stood up for Donna with Owen and demanded that he leave town. It showed a little more aggression, which is far more interesting.

What I liked even more this week was Ridge. He has certainly become more appealing since losing his job. Many posters have mentioned this and I agree, he’s a lot more fun to watch when he’s relaxed. I say keep him out of Forrester Creations and send Ridge on a new career path.

One final note. I can’t decide if I think Owen spiked the gin that caused Eric’s heart attack or if it was Pam’s lemon bars. All I know is I like Pam lurking around making snide comments about Donna. I hope that even though she’s been demoted to general reception, she makes it up to the executive level to cause trouble often!

Enter The Bold and the Beautiful’s...

Kate Hudson, 42, Goes Makeup-Free While Vacationing In Italy With Her Family — Photo