Bad Santa.
Maybe some like the Nick and Donna pairing, but it just seems to be one big snoozefest for me. The only interesting aspect of Nick and Donna is Pam's presence. Although a bit twisted, it is entertaining to watch Pam prank Donna. If you are tired of this story or another, vote which B&B storyline you've had enough of.

"It's a Wonderful Life."
Stephanie is never one to let up on anything, and it has been great to see her continue to push the envelope when it comes to helping Beverly and the other individuals who touched her at the Foster center. It is a wonderful time of year to focus on peace and goodwill towards others. In recalling some of the Christmases we've watched in Los Angeles, I feel nostalgic for the time when Jackie and Nick embraced Stephanie. She had been shunned by the Forresters, and the Marone clan took her in and they had a marvelous time celebrating together. Nick dressed as Santa Claus and sang Christmas tunes to the children. I much prefer Stephanie and Jackie as great friends, rather than this stolen design business they have going on now. Hopefully, they will find a way to be friends again in 2012.

Do you have any other special Forrester Christmas memories? Feel free to share them with us and watch this past "The Bold And The Beautiful" Christmas
moment, featuring the fabulous and missed Sally Spectra. 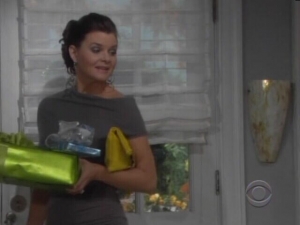 The Bold and the Beautiful was all about who has been naughty and who has been nice this week. Some characters and storylines are in need of a Christmas miracle. Let’s get to it.

Christmas Vacation.
While not quite the Griswalds, the Spencer clan is becoming an entertaining family to watch. It would be a big challenge to accept your husband’s mistress into the family, but Katie did just that this week. Katie and Steffy will never be friends, but they could do a lot of damage together. They are much more interesting to watch than a Liam and Hope pairing would bring to the Spencer empire.

Jack Frost.
Liam is so puzzling. One second, he is determined to stay in his marriage that he claims satisfies him. The next second, he tells Rick he will end his marriage over the holidays. Why would Liam listen to advice from Rick? Even if Liam did leave Steffy, what’s to say he and Hope will make it? Liam and Hope had their issues. They seem to have magically forgotten all of their problems. One way or another, Liam needs to make up his mind and stick to a decision.

“How the Grinch stole Christmas.”
It might be easier for Liam to be in a relationship if he did not have so much interference from others. It was so annoying to listen to Brooke and Rick discuss how he and Hope belong together and come up with scenarios for the two to see one another-like on Christmas. They both need to get a life. It is equally annoying to have Bill running interference as well. If two people belong together, they will eventually end up that way no matter what anyone else does to keep them apart.

The Bold And The Beautiful Spoiler Video: Rick's Talk

The Bold And The Beautiful Saturday Teaser Poll: Controversy