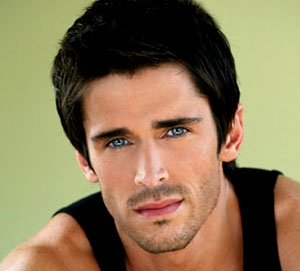 The 2009 Soap Cruise is prepped and ready to launch with a slew of first time and returning actors. One of the familiar faces fans can expect to see aboard the ship is Brandon Beemer, who plays Owen on The Bold and the Beautiful, and who had so much fun last year, he had to come back for more.

When I spoke with him on the phone, Beemer apologized for calling later than we had scheduled, but he had a good excuse. “Today is my first day working with Susan Flannery (Stephanie). That’s the reason I’m calling late because I was running lines with her. I get to work with her today and I’m very excited. I think we’re going to do some good work together,” he mused.

As for what Owen and Stephanie have cooking up, you’ll have to wait to find out, because as Brandon explained, he was under strict orders from TPTB not to talk to me about his storyline. (Although he did describe playing Owen as “different” and “refreshing” as compared to playing Shawn on Days of Our Lives.) Even though I had several questions lined up about the mysterious Owen, I was just as happy to discuss how much fun the upcoming cruise is going to be!

Explaining why he chose to board the Soap Cruise for its second voyage, Brandon shared, “I just loved the interaction with the fans. The events that we had, and just going on a cruise was a lot of fun. This year especially is going to be a lot more fun because we are on a much better ship, much nicer, better food and amenities and everything.”

As for next year’s itinerary, Beemer wasn’t exactly sure what fans could expect, but if last year is any indication there will be more than enough opportunities for fan/actor interaction. Citing last year’s Q&A, brunch and acting session where fans can write their own scripts and perform them with the actors, Brandon previewed that due to the increased number of passengers and actors this year, the 2009 cruise will include even more activities than before.

With the ship launching out of Miami, touring the Florida Keys and stopping in Cozumel, Mexico, I wondered what it was like for the actors to be so accessible to their fans for four days straight. As Brandon recalled from last year, “It was kind of strange. Everywhere you went you kind of knew the whole situation, but at the end of the day it’s just nice to be able to put a smile on people’s faces. And a lot of people are very respectful and when we’re not doing an event a lot of people mind their own business and let you do your own thing.”

One of sixteen soap stars attending, seven of whom are returning from the 2007 cruise, Brandon is pretty familiar with all his fellow shipmates, stating, “I’ve pretty much met everybody that’s going to go on the cruise and they’re all very nice so I think it’ll be a good group.” However, he did let me know that he is looking forward to hanging out with a couple of actors in particular. “I love going and doing events with Christian LeBlanc (Michael, The Young and the Restless). He’s a blast and Lesli Kay (Felicia), granted we’re on the same show, but she’s going and I’m excited about that. So it’ll be fun,” he enthused.

Although he’s not complaining and even enjoys it, the cruise should come as a nice relaxing break for Brandon come January seeing as how the show is, “Working me like a dog.” Considering all the possible storylines for the enigmatic Owen, that can only mean a lot of juicy things for the fans to talk to Brandon about!

Soaps.com can’t wait to meet up with Brandon again this year on the Soap Cruise and will be sure to bring you back all the details first hand!

Kay Alden is named Bold and the...