Hey, Sailor!
Nick was looking extremely good steering the Shady Marlin with his shirt open, and the romance and chemistry between him and Donna was magnetic enough to excuse how ridiculous it is that he's been with both of her sisters and that she just broke up with Justin five seconds before that.

Stolen designs.
Well, it's been done before, but at least it shook things up over at Forrester - put a stop to the in-fighting for a minute (speaking of which, where has Thorne been?), and gave Hope something to talk about other than her own love life. Poor Beverly being falsely accused. And poor Marcus! That was such a funny scene when he walked in on Brooke and Ridge in the steam room - good stuff.

Do you hate me that much?
It was ironic that Stephanie accused Jackie of hating her enough to steal the designs when it was actually Pam who hated her enough to do it! In any case, Stephanie slapping Jackie and the two of them having it out was great viewing. 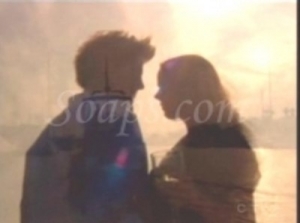 Eyes open.
No one can blame Katie for being upset about having her hubby’s ex-mistress in her face, but at this point, if she’s not going to leave Bill, she needs to undergo a reality check. First, she needs to clue in that Bill’s feelings for Steffy are the threat right now – as opposed to the other way around. Steffy seems perfectly content with Liam. Also, if she’s truly worried, Katie might want to reconsider her strategy – making Liam suspicious of his wife, and risking breaking them up, isn’t her best move – a dumped Steffy will turn to Bill. On a related note, how funny was it when Bill told Steffy they had to respect Katie’s feelings – right after he gave Steffy a seat on the board and told Katie to like it or lump it? Man!

Are you happy?
If Hope asks Liam this again, I’m going to smack her. The fact that he’s not left Steffy should be all the answer she needs – why keep prodding? Anyway, Hope’s visit to Liam’s office bored the pants off me this week – just move on already.

Showtime?
As much as the ‘Jackie channeling Sally’ story seemed like it should be fun, somehow it didn’t work. It just made us miss Sally and think Jackie’s crazy – especially wearing the red wig. Nick and Jackie manipulating Pam has taken a turn for the ugly at this point too. Copying the Forrester line to save themselves is one thing, but asking Pam to continue stealing is another. It seems completely out-of-character for Nick to be on board with any of this – stealing designs, lying, using Pam – bleh. On a positive note, it was nice to see Owen and Bridget this week – love her dark hair! Do you like the story of Jackie Marone channeling Sally Spectra?

The Bold And The Beautiful Spoiler Video: Stephanie's Confrontation

The Bold And The Beautiful Saturday Teaser Poll: Pam's Stress