Give and take.
Thomas and Hope make a cute potential couple, but it’s a bit weird that he’s so willing to push himself on someone who obviously doesn’t feel the same way, and it’s also odd that she’s into making out with Thomas when she just vowed to never give up on Liam. As for Steffy and Liam – they could be the great couple she keeps selling them to be if he would stop with the far away, melancholy looks, and she would stop trying so hard. Both of these couples are just awkward right now.

Stay the hell away.
Stephanie putting Jackie on notice about Eric was good drama, but will the rivalry be as compelling this time around? Stephanie better have a bottle of honey up her sleeve and be prepared to use it, otherwise Eric’s going to be a pretty easy target for seductive Jackie given his current state of frustration. Let the games begin.

Not waiting another fifty years.
Stephen and Pam were an unexpectedly entertaining couple, so it was disappointing to have their story cut short to facilitate Pam running around like she’s off her meds and stealing designs for Jackie M. Pam is a fantastic character, so is Nick, and much of their material this week was hilarious, but it also felt a bit too over-the-top at times. What really worked in this story was when Nick and Pam toned it down and got real on Friday’s episode. It was sweet to see Nick sweep her off her feet with that kiss and try to make her feel better. As for the design theft, it seemed this was beneath the folks at Jackie M given the way they reacted to Amber doing it! Should Nick and Pam become a couple? Let us know by voting in Soaps.com's The Bold and the Beautiful Snap Poll: New Couple? 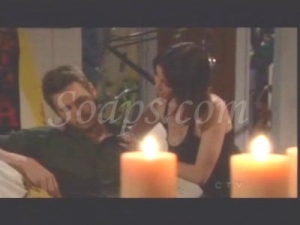 “B&B” is still showing more of a mix of characters, which is great, but there’s still too much focus on Hope/Liam/Steffy, and it’s irritating that another couple (Pam and Stephen) has been broken up in a plot-driven move much like with Jackie and Owen. Here are some thoughts on the week:

Hopeless for the future.
Hope is coming across a tad arrogantly all of the sudden. She’s assuming that if she’d made it to the top of the mountain, Liam would have dumped his fiancée to get back with her. She also behaved insufferably toward Ridge – the one time he supports Steffy’s point of view, she basically disowns him as a dad – wow!

Annul your marriage.
Katie has every reason to dislike Steffy, but to show up on Liam’s doorstep and basically insist he annul his marriage and go back to Hope seemed like overstepping. It’s the same thing with Brooke showing up to confront Steffy – why would she even let her into the house? The trouble is, Katie and Brooke are both assuming that Liam would have dumped Steffy if Hope had made it to the top of the mountain, which he has never said he would have done. Also, they’re just ignoring the fact that he willingly said, “I do.” He could have told Steffy it was too soon to tie the knot – Hope or no Hope – but he didn’t. They need to let ‘The Waffler’ decide on his own and take a step back. As for Ridge’s interference – it was worth hearing if only for his admission to Liam that being in love with two women at the same time is tough – he’d know! Some are complaining that Liam/Hope/Steffy are being set up as the next Ridge/Brooke/Taylor – maybe that’s why we feel so weary of listening to all of this bunk day in and day out.

I want my son back.
That was an enjoyable ‘connecting’ moment between Ridge and Thomas this week – Thomas does a great job of displaying vulnerability – almost makes viewers forget his past transgressions.

The Bold And The Beautiful Spoiler Video: Hope's Declarations

The Bold And The Beautiful Saturday Teaser Poll: Attention Getter