The Bold and the Beautiful’s Jack Wagner Tees Off in Tahoe! 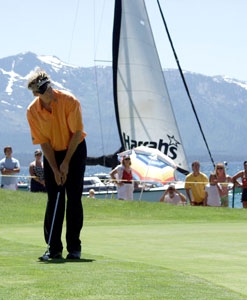 Originally posted July 9, 2008 – It’s a well-known fact that The Bold and the Beautiful’s Jack Wagner (Nick) is a highly respected celebrity golfer, and this week he feeds that reputation by participating in the 19th American Century Championship in Tahoe, NV. Wagner will once again join other celebrities as they take to the links in one of celebrity golf’s most popular tournaments.

One of only six players who have teed off in all 19 tournaments, Wagner won in 2006 taking home a $125,000 winner’s check. Friday’s action will be aired, albeit delayed, on ESPN2, with NBC providing live coverage on Saturday and Sunday.

If you are interested in attending, tickets will be available daily at the gate. Tickets for the remaining events are $15 for Thursday’s American Century Celebrity-Am and $25 for each round on Friday, Saturday and Sunday.

This celebrity golf tournament has raised over $3 million dollars for various charities over the years, with the past three years seeing the Lance Armstrong Foundation as a main beneficiary.