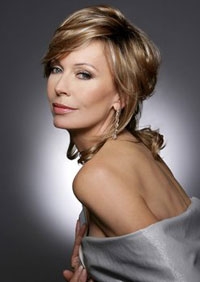 Playing fashion maven Jackie Payne Marone on B&B since 2003, Lesley-Anne Down has certainly had her fair share of juicy storylines. She has fallen in love with Eric, Massimo and Deacon, been pushed off a balcony by Stephanie and was outted as a former prostitute in front of everyone! Lately however, Jackie hasn’t had much to do except meddle in her son Nick’s love life, but according to the content actress, that suits her just fine.

I had the opportunity to talk with Lesley-Anne as she was driving down the Pacific Coast Highway in Los Angeles, and while our phone connection wasn’t the clearest, it was perfectly clear was how happy she is to be a part-time actress and a full-time wife and mom.

When I asked about the petition on her website to garner more storyline for Jackie, she told me she doesn’t have anything to do with it, as she basically lets her webmaster run her site. So in regards to asking Brad Bell (Head Writer/Executive Producer, B&B) for more screen time, this veteran actress isn’t too concerned about it. “I think it’s very sweet of everybody to put their energies into me, but really I don’t need a petition. I am very happy with being the backup person if you want to put it like that. I don’t mind talking about other people and letting the other people have all the work to do. I’m sorry, I don’t. I don’t have that need,” she explained. “Young people particularly have a need that are starting out in their careers and want to be the star; they want to have the fame; they want to have all that stuff that goes with it. I don’t have that need anymore. Did that. In a way I hope it doesn’t work! (laughs)”

Having been a working actress for roughly four decades, Down first came to the U.S. from England when she was seventeen-years-old and hopped back and forth across the pond until she permanently moved to L.A. at the age of twenty-six. She found much success in Hollywood starring in, among other things, “The Pink Panther Strikes Again,” the TV version of “The Hunchback of Notre Dame,” the gloriously soapy mini-series, “North and South” and its subsequent sequels, “Dallas,” where she played Stephanie Rogers, the short lived “Sunset Beach,” where played Olivia Richards and “Days of Our Lives,” where she played Lady Sheraton in 2001. With such a lengthy resume behind her, Down isn’t too concerned about pursuing other projects, as she doesn’t even have an agent. “If [B&B] didn’t happen I wouldn’t work. I’d just be a mom and look after my husband,” she shared.

Taking care of her family, which includes two biological children and two step-children, involves spending a lot of time on the baseball field, as she explained, “I have a ten-year-old who is so energetic. He is so phenomenal. He’s on a little league all-star team and Don (her husband) is coaching. I kind of live at a baseball field. Every night I’m soaking baseball pants in bleach trying to get stains out. I am a baseball mom. The word soccer mom doesn’t fit. I’m a baseball mom! I live, eat and breathe it.”

As far as her character on B&B is concerned, Jackie hasn’t had much luck in the love department lately. While it doesn’t bother her to focus on other characters’ love lives, Down says she wouldn’t mind getting a new love interest either, as long as his name doesn’t start with the letter J. “You’ve got Jack Wagner (Nick). My character is Jackie. My grandson is Jack. My son’s name in real life is Jack. My best friend in England is Jackie. And now there’s that lovely girl who just joined the show whose name is Jacqueline (Steffy)! It’s too many J’s,” she laughed.

Since B&B is based in the fashion world, and since some of you wanted to know, I asked her which fabulous designers they put her in on the show. Unfortunately, she didn’t know, stating, “I can’t answer that because I don’t look at the labels. The only thing I care about is do they make me look fat? And colors. I like true colors. A true pink. A true blue. A true yellow. A true orange. I don’t like colors that are darker. I like true colors or pale versions of those colors. And that’s all I care about - Does it make me look fat? Is the color nice and pale?”

To ensure she doesn’t look “fat” onscreen, Lesley-Anne underwent a major diet change. “I got a book called The Sugar Solution and read it and it just changed my way of eating. It wasn’t fast, which is good, because fast is bad. It was slow and I just basically lost twenty pounds.” As the title suggests, the diet is based on cutting sugar out of your diet, but for Lesley-Anne, that doesn’t mean ALL sugar. “I didn’t cut out wine. Don’t be silly. I’m not cutting that out! And I do eat sugar. I have a piece of dark chocolate every night. What I did was, I was pretty strict with it apart from the wine at the beginning and then I eventually introduced a few things here and there that I liked, but basically you just eat sensibly and you cut out white bread and butter, that’s a biggie, and cheese, that’s a biggie. No cheese, no white bread, no butter and you eat small portions, but very often, like every hour and you just lose weight.” Of course she also incorporates exercise into her new regimen which includes a combination of pilates and elliptical work.

While you may miss seeing more of the fit and talented Lesley-Anne on B&B, the less you see of her probably means the more she’s enjoying her low-key lifestyle. When not working or attending her son’s baseball games, she shared, “I love to cook. I love to have facials. I like to go to the movies. I’m pretty easy going and you know, don’t have a lot of crazy things I do really. I’m a pretty undemanding wife, a pretty undemanding friend. I like going to people’s houses and have a dinner there and having them over to my house. I don’t enjoy big parties. I’m the very opposite of what I was when I was young.”

With such a lovely way to spend her time away from work, I wondered if she would continue on with the show once her contract is up in February of 2009. While she isn’t sure what direction her husband’s life is going in, (he is director and cinematographer Don Fauntleroy) and what that will mean for her, she mused, “If [B&B] carries on like it is at the moment, a little bit here and a little bit there, there’s no reason not to do it.”

It was lovely chatting with Lesley-Anne and now that we know how happy she is with her current work schedule, it’ll make seeing her pop up on B&B all the more enjoyable!