Childish.
Wow, I couldn't believe how Stephanie treated Eric after he went to the trouble to get roses and champagne. Her words were so unnecessarily mean and hurtful. She could have gently said it was nice, but she wasn't up for it, but no... Stephanie has always been a cold fish (unless she's trying to win Eric back from another woman), and frequently speaks down to Eric as though she's his mother, not his wife. Of course, it's not right for Eric to be kissing Jackie while he's married - he should leave first. Stephanie may be fighting cancer, but as Eric pointed out, she's not too exhausted and uninspired to travel and do fundraising - so she should put some energy into her marriage too.

Ridge's rampage.
There are few things more entertaining to me on "B&B" than when the usually unflappable Ridge works himself up into a good self-righteous rage with that gruff, growly voice. He was wildly off-the-hook this week with Eric - even leveling the dreaded double pointed fingers at dear ol' dad! While I understand him feeling defensive of his mother, I thought his behavior was pretty arrogant and over-the-top. But very entertaining...

Support system.
Thomas is being very sweet and supportive where Hope is concerned - methinks he's falling for her. I don't know how I feel about this yet, to be honest - time will tell.

Confession time.
Well, Steffy came clean on Friday. I don't know how this is going to work out for her, but it's an interesting strategy. Do you think Steffy's gamble will pay off? Let us know by voting in Soaps.com's The Bold And The Beautiful Snap Poll: Steffy’s Gamble. 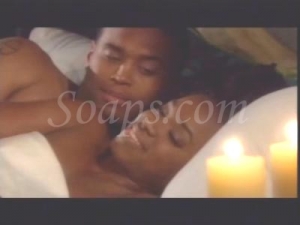 I enjoyed “B&B” this week much more than I have for a while. I think it’s due to the better mix of storylines and characters, which makes things much more interesting. Here are my thoughts on the week:

Boo!
Well, the green-eyed monster put in an appearance on Halloween – that would be Taylor, who suddenly discovered a renewed appreciation for Thorne upon finding him sipping cocktails with Amber Moore at Bikini. This encounter left me wondering how genuine her feelings for Thorne really are, considering she seems to run hot and cold on their relationship depending on the circumstances. Also, I’m not sure how Thorne feels about being called ‘a dear, sweet man’ – not overly sexy is it? Anyway, I just hope things change for Thorne at work – something’s gotta’ give.

Sacrifice.
Speaking of running hot and cold, that’s how I’m feeling about Jackie’s storyline. While I love her being a player in the Eric/Stephanie storyline, I still find the whole scenario with her sending her hubby off to another woman seriously bizarre. The fact that everyone concerned is so accepting of it, only makes it stranger.

Playing house.
Uh oh, I can see the potential for conflict down the road with Dayzee becoming attached to Rosie, and the idea of being a family with her and Marcus. I hope Marcus doesn’t get any grandiose ideas about taking custody of Rosie from Amber – that would be nasty. As for Marcus and Dayzee, they’re not the most exciting couple in the world, but their first-time lovemaking was certainly hot!

The Bold And The Beautiful Spoiler Video: Amber's Declaration

The Bold And The Beautiful Saturday Teaser Poll: A Plan